One of the bummers about aging is that we seem to lose our mind.

But losing your mind through senility, dementia or simple forgetfulness — is it inevitable?

Maybe you know people in their 80s or 90s who are completely sharp.

And we also probably know people who are 50 and they have lost their mind completely.

Is there something that we can do to protect their brain so that our brains do not age quickly?

Can we protect them so that our brains are as good as they were when we were young?

There are even websites that are entirely about how to train your mind to focus and how to strengthen your mind.

But there are other ways.

Methylene blue may be the key to keeping our minds sharp well into very old age.

Methylene blue is one of my favorite substances.

It’s used as a cellular stain.

Methylene blue is also a known treatment for a number of medical conditions, including urinary tract infections.

You can buy a bottle of it in the fish store for about eight bucks.

And that bottle will last you about forever.

Of course, you should not experiment with anything without talking to the doctor first.

One of the ways that methylene blue works is to scavenge nitric oxide from our cells.

People are under a misapprehension that nitric oxide is good for you.

Nitric oxide is a very important chemical in the body.

But you live longer and happier and healthier when you keep your nitric oxide level as low as possible.

And now it turns out your thinking is better when your nitric oxide levels are lower.

You can increase your focus and concentration by reducing nitric oxide in your system.

This is a very good study because it was done in a randomized controlled trial.

And they gave the other group a placebo containing no methylene blue.

Then they taught the participants some tasks.

Researchers tested them and did scans of their brains.

Neither the researchers nor the experiment subjects knew if they were getting the real methylene blue or the placebo without methylene blue.

So there was no chance of bias.

This is why random controls are the best studies! 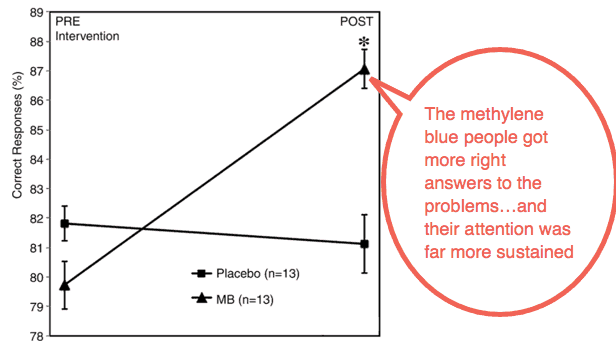 I’ll let you in on another huge secret of methylene blue.

Methylene blue increases the energetics and efficiency of every cell in the body.

It increases the energy producing capacity of the mitochondria.

The mitochondria are the energy factories in each cell.

As we age, the mitochondria become less and less efficient.

Usually, the cells use the efficient oxidative phosphorylation method of producing energy.

Oxidative phosphorylation produces energy by oxidation of the nutrients it receives.

Aging causes the cells to switch to a less efficient method.

We want to reverse this process and go back to oxidative phosphorylation.

This is a very positive metabolic change in the body and in the brain.

And this is true in the brain as the study shows:

So between its nitric oxide scavenging, and it’s increasing the energetics of the mitochondria, methylene blue is almost a magical substance.

Now, you may be wondering if you can do this at home.

You can, just talk to your doctor first.

Methylene blue was administered in the study in doses of around 25 to 50 mg.

If I take methylene blue at home, I usually take only 1 mg.

There are many studies that show methylene blue is safe even in hundreds of milligrams per day.

There are some side effects of methylene blue.

You shouldn’t take it in larger quantities unless you are aware of the side effects.

For example, methylene blue is an MAO inhibitor.

These are a class of drug often used to treat depression and Parkinsons.

And there are foods you cannot eat while you’re taking them.

So at larger doses of methylene blue, you have to be careful not to eat aged cheese or red wine.

There are also some drugs that can interact larger doses of methylene blue.

However, methylene blue is a great help in cases such as the onset of senility, or even Alzheimer’s.

And this study shows that methylene blue can help people even with healthy but aging brains.

Matt Cook is editor-in-chief of Daily Medical Discoveries. Matt has been a full time health researcher for 26 years. ABC News interviewed Matt on sexual health issues not long ago. Matt is widely quoted on over 1,000,000 websites. He has over 300,000 daily newsletter readers. Daily Medical Discoveries finds hidden, buried or ignored medical studies through the lens of 100 years of proven science. Matt heads up the editorial team of scientists and health researchers. Each discovery is based upon primary studies from peer reviewed science sources following the Daily Medical Discoveries 7 Step Process to ensure accuracy.
Multimodal Randomized Functional MR Imaging of the Effects of Methylene Blue in the Human Brain
http://www.ncbi.nlm.nih.gov/pubmed/27351678