The entire history of medicine is loaded with lies.

There are so many of them.

There was no time when the lies ever stopped.

And it means is that today, there are still so many of these lies in medicine.

For example, they used to lie and say that bed rest was best after a heart attack.

Millions of men were killed because they followed the stupid advice.

Doctors used to do autopsies and then go ahead and deliver babies without washing their hands or using antiseptic.

Millions of women died in childbirth and more afterward from infection.

You’d think that they just didn’t know any better at the time.

You’d think that medicine evolves and replaces these lies — but you’d be wrong.

Most of the lies persist, and we get new ones.

One of the big lies today is that telomeres are the key to long life.

I’ll explain what telomeres are and why you shouldn’t believe the propaganda about them.

And I’ll end today’s newsletter with some REAL keys to living a long life that you can use TODAY.

One of the lies today is that there’s a relationship between telomeres and aging.

They think that lengthening telomeres will somehow help prevent some of the traumas of aging.

Telomeres are the tips on each chromosome.

They act as buffers to the ends of the chromosome against damage.

Every time a cell divides, the chromosomes have to divide too. 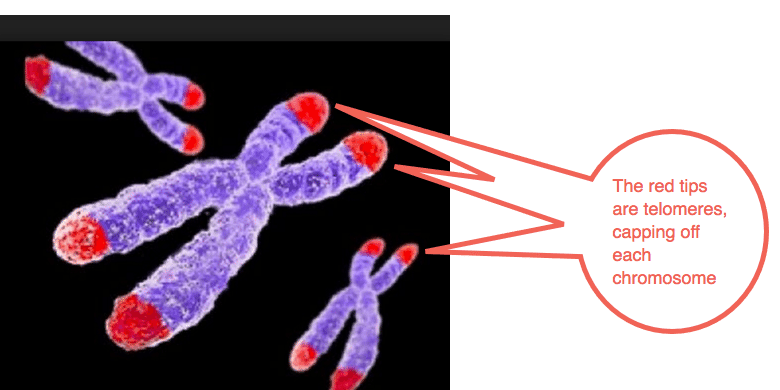 And it was thought that the telomeres protect the chromosome against damage during cell division.

Every time a cell divides, the telomere get shortened.

Pretty soon, you got all these cells and no telomeres protecting the chromosomes.

Or if it does divide, it will have damage to its genetic code because it’s lacking the protection of the telomeres.

But it’s complete and total garbage.

In fact, we have many cells in the body that divide thousands of times.

The idea of there being a limit to how many times cells can divide is called the Hayflick limit.

But it turns out the Hayflick limit is junk science.

Stem cells in some renewing tissues undergo >1,000 divisions in a lifetime with no morphological sign of aging.

In other words, in the test tube, cells reproduce very poorly.

And after about 50 cell divisions, there are about done.

This is a good time for me to mention an exception to the limited life of test tube cells.

Cancer cells can go on and on reproducing forever in the test tube.

So when they do experiments on a lot of different tissues in the test tube, they use cancer cells.

Because the cancer cells can go on and on and on, and they never die.

In fact, they make some vaccines out of cancer cells for that reason now.

But getting back to this complete junk science of the so-called Hayflick limit.

Looking at the idea that telomeres have to continue shortening with each cell division — it simply ain’t so.

Oddly enough, these observations have had little if any effect on general acceptance of the Hayflick limit in its original form.

People still continue swallowing the story about the Hayflick limit.

And they believe that telomeres disappearing eventually results in aging.

So they think that some people age less quickly than others because they have long telomeres.

You see, for a while they believed that the machinery that protects the telomeres was not present in most human cells.

This is an enzyme called telomerase.

So some studies focused on how to increase telomerase.

They thought telomerase didn’t exist in most cells.

Telomerase exists in practically every cell.

So it gives protection to almost every cell.

It seems likely that

telomerase is active where and when it is needed to maintain tissue integrity.

So if telomeres don’t cause aging what does?

Here’s a review of the current literature that just came in from St. Petersburg, Russia.

It has some great science behind it.

Senescence is literally the science of the deterioration of the cells with age.

Here’s what this review suggests about aging cells.

But if the cells are stressed, then they are very limited as to how many times they can reproduce.

The stress that I’m talking about includes stress from a poor diet.

Or it may be stress from hormonal imbalances or from lack of sleep.

It could be stress from too much alcohol or any number of things.

As we get older, the damage of these stresses to our system accumulates in our cells.

The first thing to go is efficient generation of energy.

This is the process known as oxidative phosphorylation.

Our cells still produce energy, but they do it in a very inefficient way.

This inefficient production of energy causes a build-up of lactic acid and estrogen are tissues.

Inevitably, this leads to fibrosis building up in all the tissues — including the liver, the heart, and the penis.

By increasing the energy production of the body, we can roll back the clock on our metabolism.

And now cells can again reproduce many, many, many more times.

They reproduce as they could before they were so stressed.

Please realize that when I say “stress,” I’m talking about physiology.

This isn’t necessarily stress from a bad boss at work or money worries.

Those stresses can be very damaging.

But the stress I’m talking about is what’s going on in every cell in the body.

One of the most promising leads to increase lifespan and health is energetics of the cell.

Uncoupling of the mitochondria is perhaps the most powerful way that’s been discovered to increase cell energetics.

It could increase lifespan by as much as 40%.

And it has nothing much to do at all with telomeres.

Matt Cook is editor-in-chief of Daily Medical Discoveries. Matt has been a full time health researcher for 26 years. ABC News interviewed Matt on sexual health issues not long ago. Matt is widely quoted on over 1,000,000 websites. He has over 300,000 daily newsletter readers. Daily Medical Discoveries finds hidden, buried or ignored medical studies through the lens of 100 years of proven science. Matt heads up the editorial team of scientists and health researchers. Each discovery is based upon primary studies from peer reviewed science sources following the Daily Medical Discoveries 7 Step Process to ensure accuracy.
The disparity between human cell senescence in vitro and lifelong replication in vivo
http://www.nature.com/nbt/journal/v20/n7/full/nbt0702-675.html
http://www.sciencedirect.com/science/article/pii/S0531556515300632