People think that omega-3 and omega-6 fatty acids are essential, but evidence shows that they are not so essential as we think.

It is difficult to have a diet where you don’t get any omega-3 or omega-6 fatty acids in any event.

Almost every fruit or vegetable, almost every animal meat source contain some Omega-6 or omega-3 fatty acids, which we call PUFAs, short for polyunsaturated fatty acids.

But never in history has a population consumed the high levels of PUFAs that we get today. 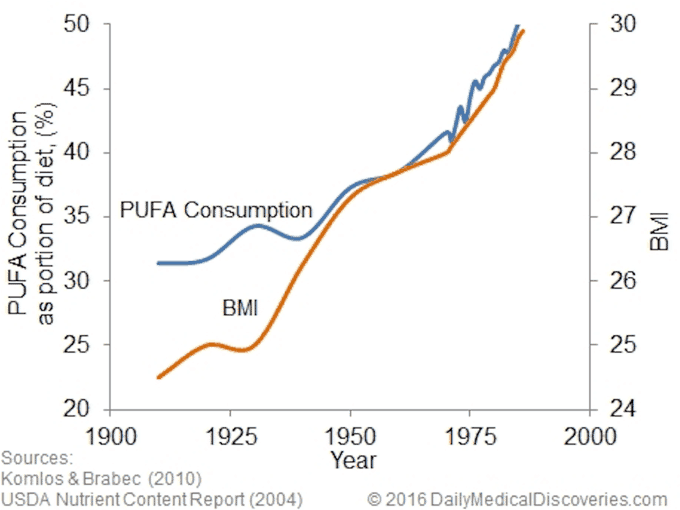 And because research is done under conditions of fads, depending on where the money is at a given point, it’s difficult today to do research that shows say fish oil (as one example) in anything but a flattering light.

But the fact remains that omega-3 and omega-6 fatty acids are extremely unstable.

If you leave them out, they will turn into greasy, smelly messes.

Just look at what happens to the bottle of vegetable oil– it oxidizes quickly, so it smells rancid, and it gets greasy and sticky.

That’s exactly what happens as soon as you swallow anything with PUFAs in it.

It turns into a greasy, sticky mess in your body.

For that reason, our bodies have evolved elaborate defenses to handle PUFAs.

That’s what this study aims to determine, the effect of PUFAs on immunity and autoimmune disease.

The author of the study is clearly sympathetic to the idea that PUFAs are essential.

But the results of the study are quite different than what you would expect.

Yes, you read that right.

Yes, that’s right again. It turns out that

A high-fat diet consisting of equal amounts of lard and soyabean oil (rich in linoleic acid) [PUFA] causes animals to develop more severe disease and have a shortened lifespan.

The author continues with some information that shows that omega-3 fatty acids, and especially fish oil, may have some positive benefit against autoimmune disorders because they suppress the immune system.

However then he continues:

We found that feeding fish oil augmented autoimmune disease in the rat…but the
animals developed more severe clinical disease after discontinuation of treatment.

And this is the problem because fish oil has a short-term benefit, but a very severe long-term detriment.

In the short term, it does lower inflammation.

But a longer run, it increases inflammatory diseases and makes them even worse.

Many of the studies that show a benefit for fish oil are only done for very short time, such as a few weeks.

That isn’t nearly long enough for the negative effects to become apparent.

I am not saying that it isn’t beneficial to get a small amount of PUFAs in the diet.

However, the evidence for consuming fish oil and consuming vegetable oil and in any quantities is just not there.

And there are plenty of danger signs both clinically and theoretically, which boil down to high amounts of lipid peroxidation and high amounts of inflammation over the long run with consumption of PUFAs.

In simple terms, this means that the fats degrade and cause inflammation, cancelling out the short term benefits.