What does estrogen actually do?

Before you write this newsletter off as something about female hormones, it’s not.

Estrogen is present in men at levels comparable to women, especially for men and women over around age 50.

Men often even have higher estrogen levels than their wives, particularly if their wives have begun menopause. 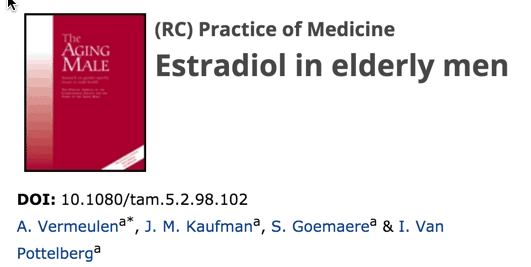 This study says that in older men,

The plasma concentration of estradiol in males is 2-3 ng/dl and its production rate in blood is 25-40 μg/24 h; both of these values are significantly higher than in postmenopausal women.

There have been very few studies done on the effect of estrogen on men specifically.

So most of the effects that estrogen has on men are still a mystery, and some are just coming to light.

What we do know is that fat cells secrete estrogen, and it doesn’t matter if the cells belong to a man or a woman for this to happen.

And we know that men who are overweight tend to have high estrogen levels.

are an important factor determining sexual interest in a man.

You can measure your estrogen levels through a blood test, but much of the estrogen in your body hides out inside the cells rather than appearing in the blood.

So the blood test may not be that helpful.

A more helpful test may be to test for prolactin levels because prolactin doesn’t hide out in the cells.

Measuring prolactin may be a better way of measuring high estrogen levels because prolactin seems to go hand-in-hand with estrogen.

Prolactin may be higher following an orgasm, but overall it will still be a more effective measurement than testing for estrogen directly.

So let’s examine the effect of estrogen more closely.

This was a study where researchers gave a single injection of estrogen into rats,

and then they just monitor these rats over many months.

They used female rats, but we can still draw inferences as to how it would affect male rats and male people.

Since you’ve been a reader of my newsletter for a while, you already know that growth hormone is actually a stress hormone, and high levels of growth hormone are not healthy at all.

Then the study went even further when it talked about the negative effects of estrogen on parts of the brain.

“Numerous reactive microglia, astrocytes, and degenerating elements of the neuropil.”

Microglia, astrocytes, and neuropil are all aspects of the central nervous system, as in the system that regulates everything else.

The effects of these reactions to estrogen in the brain area can include ravenous hunger among other things.

Now let’s look at a different study where they gave vitamin E to protect against the brain toxicity of estrogen.

Remember from the study we just reviewed above that estrogen causes damage to some important parts of the brain in the hypothalamus.

In this study, they injected vitamin E, and researchers found that the vitamin E neutralized a lot of the toxicity of the estrogen.

What was especially fascinating was finding that estrogen LOWERED beta-endorphin levels, but vitamin E prevented this damage: 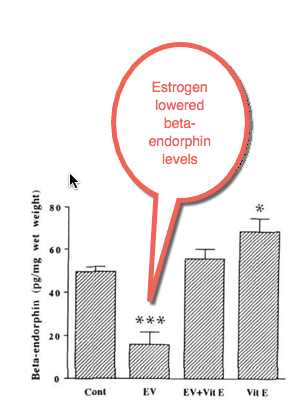 Lowering beta-endorphin can cause PAIN.

Beta-endorphins modulate pain and make us feel better in the presence of pain.

The estrogen lowered the beta-endorphins dramatically.

But vitamin E protected and even raised beta-endorphin levels.

It was also found that vitamin E can reverse a lot of the other damage from estrogen.

And this goes for men as well as women.

It may very well pay to increase your levels of vitamin E, perhaps by taking a good vitamin E supplement.

Make sure to talk to your doctor first, but vitamin E may be helpful to you many ways.

Vitamin E is far more than an antioxidant.

It is also a very effective aromatase inhibitor, so it reduces the conversion of testosterone into estrogen.

I’ll have more on that topic in an upcoming newsletter.

Effects of a Single Injection of Estradiol Valerate on the Hypothalamic Arcuate Nucleus and on Reproductive Function in the Female Rat
http://press.endocrine.org/doi/abs/10.1210/endo-103-2-501