Without the incentive to make money, drug companies rarely sponsor any study that could lead to a potential cure, especially a cure that doesn’t come in pill form.

So it’s a wonder that studies like this one ever get done.

This is actually a study released by a university, and universities make their money through study grants and other means tied to their reputations.

Universities make more money by being accurate than by studying medications.

This university released a study promoting a way to reverse diabetes that doesn’t include medication.

The researchers in this study were able to study a number of people who had undergone bariatric surgery.

Bariatric surgery involves bypass or removal of some of the stomach in order to lose weight.

And since it’s a hospital procedure with a lot of preoperative and postoperative follow-up, they were able to do an additional study on certain patients involving the fat around the pancreas.

They made an astonishing discovery!

The people with Type 2 diabetes were found to have increased levels of fat in the pancreas.

We are not talking about a lot of fat either.

We’re talking about the weight of your typical vitamin C pill.

That’s just one gram of fat.

Critically, the pool of fat in the pancreas did not change in the non-diabetics but decreased to a normal level in those with Type 2 diabetes.

So now let’s look at the next part of this, another study.

They were able to get 40% of the people in the study to reverse their diabetes.

They gave a number of diabetics a very low-calorie diet.

This type of diet can really only be administered in a hospital setting because it has to be so tightly controlled and balanced.

Patients were given three Nestlé Optifast(r) shakes per day and a bunch of low starch vegetables, presumably like broccoli, kale, etc.

12 out of the 30 diabetics in the program experienced normal blood sugar within six months.

They were able to maintain normal blood sugar without any drugs or insulin.

And they were able to do this even though they were still pretty fat.

They had lost some weight, but they were still obese.

The researchers feel that the reason that this works is because that one g of pancreatic fat melts away, and allows normal pancreatic activity.

I have grave doubts about this.

I don’t think that they have proven any such thing.

And what’s astonishing is that even on this very strict diet, 60% of the diabetics remain diabetic.

I believe that these researchers proved that depleting the body of PUFAs, polyunsaturated fatty acids, probably accounted for the dramatic improvement in diabetic results for the 40%.

Unfortunately, they screwed up because they were using this Nestlé Optifast(r) which contained loads of the worst sort of vegetable oil PUFAs.

I went to the Nestlé website, and here is the ingredients list I found for this shake that they gave these diabetics. 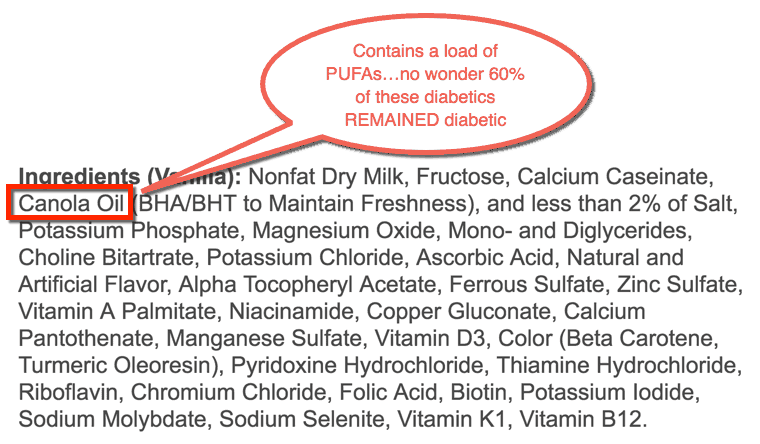 You’ll see that this is not a huge amount of fat, though, only three g of fat, so with three shakes, that would be only nine g of fat per day.

The body consumes much more fat than that at rest, so I think that the reason that this diet sort of worked is because it depleted the fat cells of large amounts of diabetes-causing and inflammation-causing PUFAs.

Despite the fact that they were eating PUFAs, the patients weren’t eating that much.

Now, the question is, do PUFAs cause diabetes?

This is a very difficult topic to find good studies on.

The existing studies are so heavily biased.

Most of these studies are done with recall methods such as keeping journals.

It is difficult to remove the bias from this method of study because we are dealing with human beings.

People who keep food journals rarely fill them out as they go through the day, and then they are trying to recall what they ate.

This leads to forgetting some things that should be in the journal and either over or underestimating other things, and cutting the journal’s accuracy.

Some people may even leave off a few things that make them feel guilty, most often things that contain saturated fat.

That really forces you to set aside most of the studies done on PUFAs and saturated fat and diabetes.

Because these studies did not adequately account for high PUFA consumption even amongst those who consume a lot of saturated fat.

For example, if you eat a pizza, some people call that a high carb meal.

But it’s also a high-fat meal. The cheese has saturated fat.

The crust often contains a load of PUFAs.

For instance, this is the ingredient list for Dominos’ Brooklyn style pizza crust.

Pizza contains both PUFAs and saturated fat, and a lot of carbs.

You could go on and on with food choices that most people make — they contain a load of PUFAs along with saturated fat and carbs.

Another example is that people talk about donuts being full of sugar, but donuts are also full of PUFAs.

Donuts are fried in vegetable oil and loaded with PUFAs.

So when you eat donuts, you are getting high carbs and high PUFAs– BOTH.

Researchers find it difficult to separate the different kinds of fat and categorize them adequately enough to account for study results.

Heck, most researchers are ignorant of the different kinds of fat and their effects.

We see this all the time in studies (even the diabetes study above).

I’m still looking for some good studies on the effects of PUFAs on diabetes.

However, for the meantime, I continue to recommend that men reduce inflammation by cutting out PUFAs including vegetable oil and fish oil.

There are huge benefits to eating fish, but they probably come from the furan oil found in fish, rather than PUFAs.

Matt Cook is editor-in-chief of Daily Medical Discoveries. Matt has been a full time health researcher for 26 years. ABC News interviewed Matt on sexual health issues not long ago. Matt is widely quoted on over 1,000,000 websites. He has over 300,000 daily newsletter readers. Daily Medical Discoveries finds hidden, buried or ignored medical studies through the lens of 100 years of proven science. Matt heads up the editorial team of scientists and health researchers. Each discovery is based upon primary studies from peer reviewed science sources following the Daily Medical Discoveries 7 Step Process to ensure accuracy.
Daily Medical Discoveries has strict sourcing guidelines and relies on peer-reviewed studies, academic research institutions, and medical associations. We avoid using tertiary references. You can learn more about how we ensure our content is accurate and current by reading our editorial policy. To continue reading about PUFA and other topics that pertain to men, click here. If you’d like further information, feel free to check out these references: Click for more information on Type 2 diabetes, for information on Natural Remedies, or for more on Weight loss and Type 2 diabetes.