An Old Herb Lady Taught Me This Recipe for Bigger Erections

I didn’t believe it until I tried it…

It’s all thanks to this humble herb lady who invented this “man juice” for the men in her village.

When they drink it, even 90-year-old men start getting bigger, better erections. And they last longer too.

So here’s her special herbal recipe for bigger, better erections… 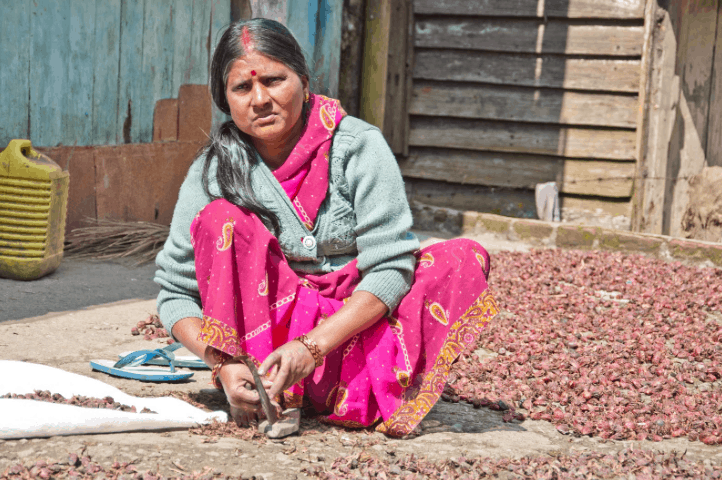 Traditional herbal remedies exist in every corner of the globe.

A tree called Phaleria macrocarpa is one of the most important remedies in traditional Indonesian medicine. It is also known as buah mahkota dewa, God’s crown, and Pau.

But it is probably most well known as a traditional remedy for impotence.

Some recent experiments in rats have shown that Pau could have potent effects on boosting fertility and libido.

These researchers carried out experiments at the Medicinal Plants Research Centre, Yasuj University of Medical Sciences in Iran and published their results in the Avicenna Journal of Phytomedicine.

In traditional medicine, they use Pau fruit to treat low libido and low testosterone.

“Pau is believed to increase testosterone levels. It has been claimed to improve sexual strength and libido behavior in men by the rural people.”

Sometimes herbal remedies are effective… Other times they are no more than a myth.

“Unfortunately, there is very little published information on the potential of Pau in improving male fertility.”

In order to get to the truth about the effect of Pau on fertility and libido, the researchers gave an extract of the fruit to male rats.

“The purpose of the current study was to determine the effect of Pau fruit’s aqueous extract on reproductive performance of adult male rats.”

The researchers then looked at the effect of Pau on testosterone levels and libido.

The researchers created three groups of rats with six rats in each group.

The rat groups got different treatments for seven weeks.

One group of rats got Pau extract. Another group got supplemental testosterone.

The final group was the comparison group – no supplements.

At the end of the study, the researchers tested the animals’ hormone levels tested.

They also introduced them to female animals to see the effect on their libido.

“On week seven, each of the male rats was introduced to five female rats on five different days to allow mating and [we] observed the libido behavior.”

Animals given Pau had 50% higher levels of testosterone at the end study.

“Testosterone level of rats treated with Pau aqueous extract and distilled water were 1.9 and 1.25 ng/mL, respectively.”

The researchers investigated libido by looking at mounting frequency (the number of times the animals attempt sexual intercourse over a given time period).

Pau supplementation led to a significant increase in libido.

Animals given Pau extract exhibited a 70% increase in mounting frequency.

Rats given the supplement were much leaner at the end of the trial too.

“Body weight was significantly lower in rats supplemented with Pau extract compared with the control groups.”

Pau seems to be a legitimate herbal remedy that can increase testosterone and libido.

“Pau showed potential value as an alternative for improving the sexual strength by increasing the level of testosterone and libido behavior.”

Other animal experiments have shown that Pau can improve the health of testicles and sperm.

These results indicate that Pau could improve fertility, testosterone, and sexual performance in men.

“Thus, it is suggested that Pau can improve fertility in men.”

Pau shows particular promise in the treatment of impotence.

“It is suggested that Pau can overcome the impotence problem in men.”

My Doctor Threatened to Arrest Me

My doctor tried to talk me out of it.

I had just told him what I was planning to do…

I knew that I was violating all of the traditional “rules” of raising testosterone…no pills, no patches, no injections…

I just wanted to raise my testosterone naturally, without any dangerous chemicals… So I underwent my very own “dangerous” experiment…

And my doctor grew so angry, he half-seriously said he’d have me arrested, LOL.

When my dangerous experiment worked, my doctor freaked out.

And, believe it or not, just a few weeks later, ABC News was calling me up for an interview.

Matt Cook is editor-in-chief of Daily Medical Discoveries. Matt has been a full time health researcher for 26 years. ABC News interviewed Matt on sexual health issues not long ago. Matt is widely quoted on over 1,000,000 websites. He has over 300,000 daily newsletter readers. Daily Medical Discoveries finds hidden, buried or ignored medical studies through the lens of 100 years of proven science. Matt heads up the editorial team of scientists and health researchers. Each discovery is based upon primary studies from peer reviewed science sources following the Daily Medical Discoveries 7 Step Process to ensure accuracy.
Daily Medical Discoveries has strict sourcing guidelines and relies on peer-reviewed studies, academic research institutions, and medical associations. We avoid using tertiary references. You can learn more about how we ensure our content is accurate and current by reading our editorial policy. To continue reading about Pau and other topics that pertain to men, click here. If you’d like further information, feel free to check out these references: