Today’s newsletter shows you one of the most common and yet little-known causes of almost all illness.

And I’ll show you how simple orange juice can help.

Restore health by eliminating toxins from your diet!

They come from outside when we eat, and they wreak havoc in the body.

They cause all kinds of infection.

In fact, many times when you think you have a cold, it could be likely that it’s really caused by endotoxins.

When you have the flu, you may have endotoxins.

When you have diabetes, you have endotoxins.

How do we know?

When you get rid of endotoxins, your health bounces back.

Even serious problems such as back pain are linked solidly to endotoxins.

Many studies have been done on endotoxins.

But most of these studies have been done with high dosages.

This study has been done with very low doses of endotoxins.

These dosages are more like the kind of dose that you would get ordinarily.

This is the dose you’d get from eating the wrong kinds of food, or having a messed up gut.

The researchers administered super low doses of endotoxins to mice.

They discovered extensive inflammatory changes in the mice.

And this was even from the super low doses that they had formerly thought to be normal and not a problem.

The biggest effect was on what’s called necrosis, or cell death.

There are two kinds of cell death, one is the organized orchestrated death of a cell called apoptosis.

This is similar to what you would do if you were dying.

You’d put your affairs in order, and you would quietly go out of this earth in an organized thoughtful fashion.

The other kind of cell death, necrosis, is when the cell gets injured and just dies.

This is what would happen if you get hit by a car and you were a mess all over the road.

In the body, when super low doses of endotoxins hit cells, the cells die through necrosis.

Then their contents spew out onto all the other cells.

The cell contents spewing out all over other cells causes a chain reaction of inflammatory processes in the body.

The result is many diseases and health states that get worse and worse as endotoxins continue to challenge the body.

Our poor livers have to do with the endotoxins first.

It has to do all the work to cleanse toxins from the body.

And this body clean up takes its toll.

This is why so many of us have what is called nonalcoholic fatty liver disease.

The liver has gotten injured.

Fortunately, the liver can bounce back.

It is quite capable of healing.

But first, you have to get rid of most of the endotoxins.

What can you do to slow down or stop endotoxins?

Endotoxins are found in food, so one thing you can do is eat fresh food.

Do not eat leftovers.

One study found that when you cut up an onion, there are no endotoxins in it.

But when you leave it out once it’s been cut up, endotoxins form within a few days.

So if you eat an onion that’s been diced a few days ago, you’re consuming massive amounts of endotoxin.

Another thing you can do is speed up your gut.

You should be having at least two bowel movements each day.

If you have a bowel movement every day or every other day or even less frequently, it’s not good.

That means that food is sitting in your gut fermenting and creating massive amounts of endotoxins.

Most people who have infrequent bowel movements also have a low thyroid metabolism.

When you speed up your metabolism, your gut speeds up, and the endotoxin load in your body goes way down.

Raw vegetables create many endotoxins in the gut.

Many raw vegetables such as salads create massive amounts of endotoxin in the gut.

Raw carrot is an exception.

Raw sweet potato and raw celery may not be a problem.

But vegetables should be thoroughly cooked in order to not create endotoxins in the body. 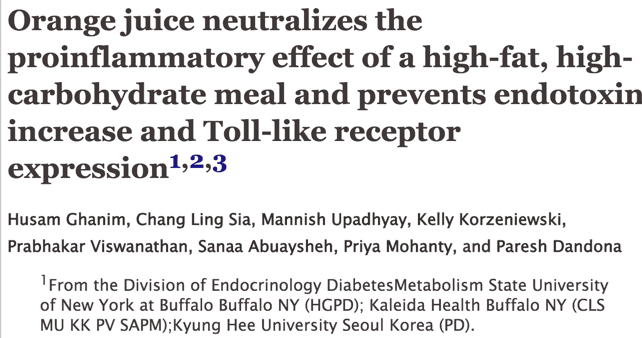 In this study, they give human volunteers a high-fat, high carb meal.

This type of meal often increases endotoxin load in the body.

It also puts a bit of strain on the liver.

The liver is being challenged with digesting a heavy meal and handling the endotoxin load at the same time.

It turns out that orange juice is a star here.

orange juice intake with the meal prevented meal-induced oxidative and inflammatory stress, including the increase in endotoxin.

A combination of changes in your diet can help to beat endotoxins.

Work on speeding up your gut.

And get plenty of orange juice.

As these studies show, this can have a revolutionary effect on your health.

Matt Cook is editor-in-chief of Daily Medical Discoveries. Matt has been a full time health researcher for 26 years. ABC News interviewed Matt on sexual health issues not long ago. Matt is widely quoted on over 1,000,000 websites. He has over 300,000 daily newsletter readers. Daily Medical Discoveries finds hidden, buried or ignored medical studies through the lens of 100 years of proven science. Matt heads up the editorial team of scientists and health researchers. Each discovery is based upon primary studies from peer reviewed science sources following the Daily Medical Discoveries 7 Step Process to ensure accuracy.
Molecular and Cellular Mechanisms Responsible for Cellular Stress and Low-grade Inflammation Induced by a Super-low Dose of Endotoxin
http://www.jbc.org/content/289/23/16262.full.pdf
Orange juice neutralizes the pro-inflammatory effect of a high-fat, high-carbohydrate meal and prevents endotoxin increase and Toll-like receptor expression
http://ajcn.nutrition.org/content/91/4/940.full