One of the signposts of getting older is our bones losing bone mass.

But is this inevitable? 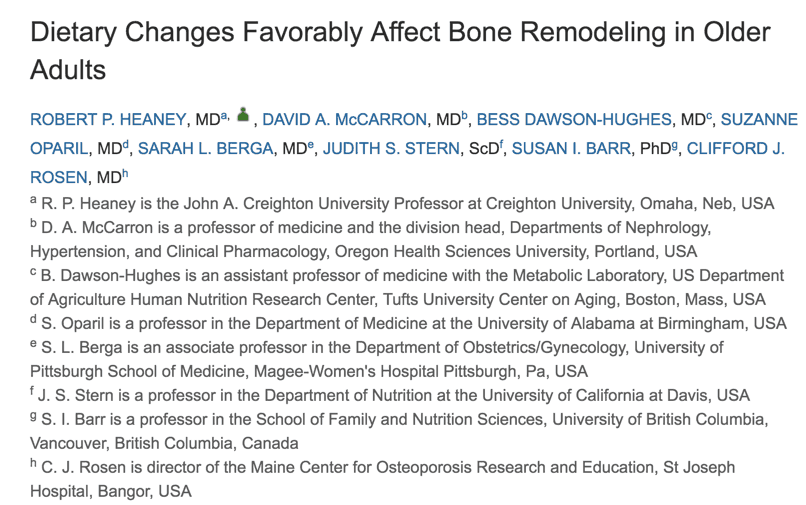 In this an important study.

The researchers took average adults who were eating less than 1 1/2 servings a day of dairy products.

Then they gave these adults some simple instructions.

They were told to drink three servings a day of either nonfat or 1% fat milk.

Here’s what happened next.

Let’s look at this carefully.

Milk contains a lot of calcium.

So their calcium intake increased a lot.

Most people have too much phosphorus in their diet, and not enough calcium.

Parathyroid hormone is something that you want to get lower if possible.

It can cause all kinds of problems in the body.

It pulls calcium out of your bones and depositing it in your soft tissue.

Many people have atherosclerosis, where they have a build up of calcium in their arteries.

This is probably from chronically high phosphorus levels in their diet.

This results in parathyroid hormone pulling calcium out of their bones.

By drinking milk, you increase your calcium levels.

And no you don’t just pee out the calcium.

There is a myth that’s been going around about milk and calcium.

The idea is that it doesn’t help to drink a lot of milk even though it contains a lot of calcium.

Supposedly, any calcium that isn’t used quickly enough is just peed out in your urine.

This study shows that this is not true.

Most of the calcium was retained.

It contributed to growth and improvement of the bones.

And here is great news about blood pressure.

It turns out that increasing your calcium levels can dramatically lower blood pressure.

This is not that surprising, as high parathyroid hormone levels often correspond a higher blood pressure for various reasons.

In this study they had volunteers consume 1 quart of milk.

Researchers compared it to other dairy products such as yogurt, and nondairy orange juice.

Then they measured their blood pressure over a period of time.

Systolic blood pressure responded dramatically to calcium supplementation and continued lower than on orange juice at 6 months, 120  to 115.

It probably could’ve been a lot better if they had also provided supplemental magnesium.

So many people are low in magnesium.

These are many of the good reasons to start consuming more healthy dairy products.

Matt Cook is editor-in-chief of Daily Medical Discoveries. Matt has been a full time health researcher for 26 years. ABC News interviewed Matt on sexual health issues not long ago. Matt is widely quoted on over 1,000,000 websites. He has over 300,000 daily newsletter readers. Daily Medical Discoveries finds hidden, buried or ignored medical studies through the lens of 100 years of proven science. Matt heads up the editorial team of scientists and health researchers. Each discovery is based upon primary studies from peer reviewed science sources following the Daily Medical Discoveries 7 Step Process to ensure accuracy.
Dietary Changes Favorably Affect Bone Remodeling in Older Adults
http://www.sciencedirect.com/science/article/pii/S0002822399003028

A Method of Lowering Blood Pressure