Tryptophan is an amino acid that is regarded as essential.

We can’t produce our own tryptophan.

They believe that turkey has a lot of tryptophan.

People know that tryptophan makes you sleepy and relaxed.

However, there is a very dark side to tryptophan.

It is not likely that we need very much tryptophan in our diet.

And it is quite likely that if we have less tryptophan we are going to be healthier and happier.

This newsletter addresses the conversion of tryptophan into serotonin and melatonin.

It shows how you can avoid getting too much tryptophan.

And you want to avoid tryptophan.

It’s used two by the body which turns it into serotonin or melatonin.

Or, our bodies can also turn tryptophan into the important B vitamin, niacin.

What we want is the tryptophan to turn into niacin rather than serotonin.

Why don’t you want a lot of serotonin?

About 95% of our serotonin is produced in the gut.

Bacteria from the gut turn tryptophan into serotonin.

But higher serotonin levels are harmful.

Excess serotonin causes anxiety, stress, and inflammation in the body.

There are drugs that will block serotonin.

The two most common drugs are bromocriptine, and cyproheptidine.

They both have slightly different mechanisms.

But drugs such as bromocriptine increase sexual libido.

The act of blocking serotonin leads to this increased libido.

When serotonin is lowered, it seems that dopamine is RAISED.

And that increases sexual drive and helps improve mood.

Dopamine is well-known to be the happiness hormone.

But an increased libido is not the only benefit of blocking serotonin.

These serotonin-reducing drugs also make it difficult to put on fat.

So by extension, they help with weight loss.

Bromocriptine in particular is one of the drugs that is recommended for diabetics.

Lowering serotonin and increasing dopamine has been shown to extremely useful in treating diabetes.

Although most doctors don’t know much about the why just yet.

But we learn a lot from the activities and effects of bromocriptine and other serotonin-blocking drugs.

It shows us that blocking too much serotonin in the body is a very good thing.

And that means eliminating tryptophan as much as possible from our diet.

So let’s look at a study on that.

In this study, they gave rats tryptophan.

Researchers monitored their serotonin, their melatonin, and their immune response.

The immune response is especially interesting because it ties into inflammation.

It’s well-established now that virtually all of our modern diseases are caused by too much internal inflammation in our bodies.

And accompanying inflammation is high amounts of serotonin.

In the dark phase, serotonin is used as a substrate for melatonin synthesis as shown by the significant increases in its plasma levels after the nocturnal administration of L-tryptophan.

Now we can understand why tryptophan-rich foods make us sleepy when eaten at night.

At night, the tryptophan is turned into serotonin.

And then it is rapidly turned into melatonin in the brain.

And we want to control both gut serotonin and brain serotonin for optimal physical and mental health.

You don’t want low serotonin either.

You need a certain amount of serotonin to move the food through the gut.

If you have low serotonin, you’re going to be constipated.

The serotonin in the brain gets there via tryptophan entering the blood-brain barrier.

Then the brain turns it into serotonin.

It turns the serotonin into melatonin from there.

Many researchers believe that too much serotonin in our brain is harmful.

They think that the brain exercises a defensive mechanism against this excess serotonin.

This defense is turning excess serotonin into melatonin.

It’s probably much better to lower our intake of tryptophan.

It’s very useful to block access serotonin in the gut and the brain.

And we can help that when we avoid too much tryptophan.

So one way of lowering your serotonin levels is to stop eating food high in tryptophan.

These are some of the foods highest in tryptophan: 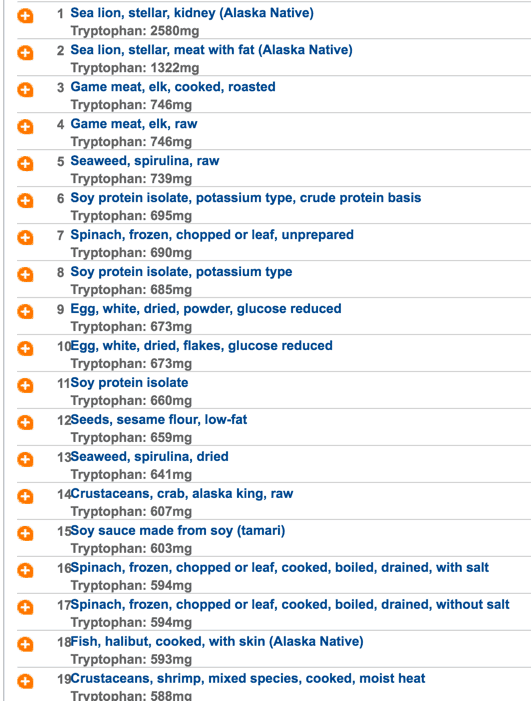 Rather than avoiding tryptophan-rich foods, the best strategy may be blocking tryptophan from entering the body through the gut.

According to this and other studies, branched-chain amino acids (BCAAs) such as leucine compete with tryptophan and block it from being absorbed.

Blocking tryptophan is as easy as eating foods high in BCAAs at the same time as the tryptophan.

You can also supplement with branched-chain amino acids.

And they will help block tryptophan from producing serotonin in the brain.

There are two good goals that come from blocking that tryptophan.

And second, perhaps you’ll live longer and healthier by driving down inflammation.

Matt Cook is editor-in-chief of Daily Medical Discoveries. Matt has been a full time health researcher for 26 years. ABC News interviewed Matt on sexual health issues not long ago. Matt is widely quoted on over 1,000,000 websites. He has over 300,000 daily newsletter readers. Daily Medical Discoveries finds hidden, buried or ignored medical studies through the lens of 100 years of proven science. Matt heads up the editorial team of scientists and health researchers. Each discovery is based upon primary studies from peer reviewed science sources following the Daily Medical Discoveries 7 Step Process to ensure accuracy.
Daily Medical Discoveries has strict sourcing guidelines and relies on peer-reviewed studies, academic research institutions, and medical associations. We avoid using tertiary references. You can learn more about how we ensure our content is accurate and current by reading our editorial policy. To continue reading about tryptophan and other topics that pertain to men, click here. If you’d like further information, feel free to check out these references:

1. What is the relationship between sex and serotonin levels?

There is a lot of medical misinformation about serotonin and sex. Most serotonin is produced in the gut. A small amount is produced in the brain. If serotonin is very low in the gut, you will get constipated.
If serotonin is low in the brain, you may feel kind of flat and deflated and kind of drained of feeling and emotion.
However, increasing serotonin levels is not helpful because serotonin is actually an ancient stress hormone. You want to minimize your serotonin levels, not increase them.
Medication such as SSRIs, selective serotonin reuptake inhibitors, and their various newfangled sibling medications, often increase serotonin levels.
The results of these medications often is for a man a difficulty getting interested in sex and difficulty reaching orgasm.
Many times the sexual effects take a long time to go away even after the drug is stopped.
It is very beneficial for a man to figure out how he can feel less anxious and less depressed in ways that do not require taking SSRI medications. Serotonin and sex are very much related and a man wants to lower his serotonin levels and raises sexual activity. This is what leads to happiness and health.

2. How does low serotonin levels affect sexuality and sex drive?

Very few men have low serotonin levels. That’s because serotonin is produced in abundance in the body and in the brain. In fact, high serotonin will result in a lower sex drive and in poor sexual performance, less sensitivity in the penis, and less sexual interest altogether.
Low serotonin is a desirable place to be. As opposed to high serotonin. Low serotonin lets a man relax. He can experience a state of having enough and not always wanting more. It is desirable to have low serotonin within limits. If gut serotonin is too low, a man will get constipation usually. If brain serotonin is too low, the man may feel a flat mood where he doesn’t feel like doing much of anything.
Serotonin does not actually cross the blood-brain barrier. An amino acid called tryptophan can enter the brain and can be used to create serotonin. Tyrosine and L-alanine are also amino acids that can be used in the serotonin metabolism in the brain.
Medication such as Prozac, Zoloft, Paxil, Celexa, and Lexapro are drugs that can make it difficult for a man to get sexually interested, make it difficult for a man to feel much in his penis, and make it difficult for man to actually reach orgasm with a sexual partner.
For this reason, it is better for a man to seek help that does not involve taking SSRI drugs. Because SSRI drugs will make love and sex less pleasurable, less interesting, and less impactful on the man’s life. Exactly what you do not want if you are anxious and depressed.