Every day, I’m shocked to get multiple emails from men who are taking statins for cholesterol medication.

I ask them, “why are you taking that?”

And they say, a doctor prescribed it because my cholesterol is high.

And I say, “what was your cholesterol level?”

So they’re on one of these drugs used to treat high cholesterol.

And many of them are on Crestor, which is the big Pharma elephant.

But even Lipitor brought in $125 billion for its creator over the life of the patent, which is now up.

Crestor is on its way to do more than that.

With all this money at stake, do you really think anyone is unbiased and objective?

So first let’s talk about this study review. 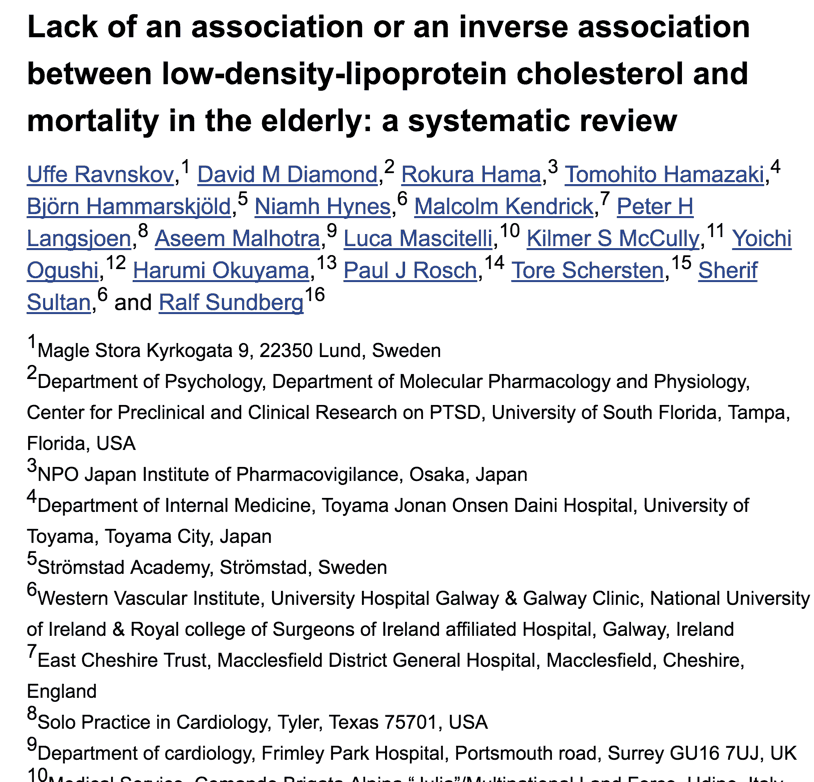 I literally ran out of room — I can’t paste all the authors of the study.

There are just too many.

The authors reviewed all the major cholesterol studies.

One of their big findings was that:

cardiovaScular mortality was highest in the lowest LDL cholesterol group.

In fact, they found that higher cholesterol leads to a longer and healthier life.

So how did we get so misled by the big drug companies?

How is it that doctors are so brainwashed that they’re still prescribing statin drugs as drug therapy?

Now let’s say that some hugely amazing drug comes along.

So if you look at it one way, you have 50% fewer heart attacks amongst people who got the drug.

So supposedly you’ve slashed the risk of a heart attack 50%.

That’s all the doctors paid attention to.

But this is actually an incredibly misleading and criminal explanation.

The real risk reduction in this example is only 1%, not 50%.

But if a drug is advertised as preventing 1% of people from getting a heart attack, who would be interested in it?

So basically, this is a statistical lie.

Because 100,000 people had to take this medication constantly in order to get a 1% reduction in what is called “absolute risk.”

Absolute risk is an epidemiological term for the amount of risk existing in an entire sample population.

In this example, the sample population is 100,000 people.

The absolute risk in this sample is 2% to begin and ends at 1%.

Now the actual trials of the statin drugs were even worse than this.

But over 99,270 people still have to take this drug constantly to cut the risk of a heart attack by 0.73%, less than one percent.

All 100,000 will have to continue taking the medication in high doses, for the foreseeable future.

Insane, but true — and it gets worse!

Here is where it gets very dangerous.

These drugs all work with the same mechanism.

Millions of people taking these drugs say that their memory goes bad.

And their muscles hurt.

There are many worse side effects, but these are by far the most common.

And this is all been swept under the rug for that .73%.

However, remember that with big Pharma, you are the guinea pig!

So, there’s a reduction (tiny, but apparently enough) and the drug passes approval.

People take the medication, and it takes about 20 years for all the bad stuff to come out.

20 years for the list of damage from that drug to be complete.

All those side effects and damage to millions of people approved on the basis of helping less than 1%.

This is why I don’t take these drugs.

I don’t trust them.

And you won’t either.

This is the most highly damning study.

It’s study funded by a drug company that shows terrible effects of these drugs.

The study is done on rats — but there is every reason to believe that this happens with people in exactly the same way.

The study contains many lies… but doesn’t hide the truth.

They gave ordinary doses of statin medications to animals.

First, they tried rabbits, but the results were so bad that they switch to rats.

It’s all in the study if you care to read it.

They don’t actually hide the truth, they just kind of lie around it.

The result was muscle necrosis — in almost all cases, muscles dying, dissolving away.

The preliminary studies with both simvastatin and cerivastatin showed that at
toxic doses muscle necrosis in the rat is widespread and commonly severe.

Toxic doses on humans muscles are widespread and commonly severe.

This is just being swept under the rug because of all the money that’s involved in it.

Realize this — cholesterol is an important part of every cell and every nerve in your body.

Any drug that interferes your cholesterol is going to have widespread consequences.

The consequences of the statin drugs are well known.

The biggest one is called rhabdomyolysis and it means your muscles die off and fail.

It can be irreversible even if you stop taking them.


There is really no evidence that these drugs lower “all-cause mortality.”

They may prevent heart attacks, but they may cause liver cancer.

They are the worst poison, and virtually nobody should be taking them.

The truth will come out.

But it will be too late for millions of people who have been taking these drugs, believing their brainwashed doctors.

Matt Cook is editor-in-chief of Daily Medical Discoveries. Matt has been a full time health researcher for 26 years. ABC News interviewed Matt on sexual health issues not long ago. Matt is widely quoted on over 1,000,000 websites. He has over 300,000 daily newsletter readers. Daily Medical Discoveries finds hidden, buried or ignored medical studies through the lens of 100 years of proven science. Matt heads up the editorial team of scientists and health researchers. Each discovery is based upon primary studies from peer reviewed science sources following the Daily Medical Discoveries 7 Step Process to ensure accuracy.
Daily Medical Discoveries has strict sourcing guidelines and relies on peer-reviewed studies, academic research institutions, and medical associations. We avoid using tertiary references. You can learn more about how we ensure our content is accurate and current by reading our editorial policy. To continue reading about statins and other topics that pertain to men, click here. If you’d like further information, feel free to check out these references: