What they aren’t telling you about drinking and serotonin…

Get this Tactical Backpack for FREE – if you hurry

Patriot, I need your help…

So, we are giving them away for FREE!

This is NOT a joke… And yes, we’re going to lose money here.

These backpacks retail for $79.95… However, we are overstocked… So you can get one for free!

Brain serotonin is very bad – alcohol to the rescue?

Serotonin and ethanol – that is a controversial topic.

There have been many trees killed, much ink used, and endless academic squabbles over just how ethanol affects serotonin.

Recently, this topic has gained a wider audience thanks to Jordan Peterson…

While not exactly a biochemist, he is a clinical psychologist and public figure.

“Studies of the effects of acute ethanol administration on serotonin activity in healthy, non-alcohol-abusing, non-alcoholic volunteers have produced results too contradictory to summarize here.” –Peterson

This topic is extremely controversial…

So controversial that researchers can hardly agree whether or not alcohol actually increases or decreases total brain serotonin levels.

But this “paradoxical effect” of ethanol on serotonin metabolism/kinetics is a misconception.

And they perpetuated their results with the help of others who’d only read the abstracts – re-reporting the wrong conclusions.

When scientists not only anticipate but actually expect paradoxical effects, they don’t make much effort to realistically explain anything.

It’s so much easier to just toss in the towel and say “Well… It’s so like serotonin to do that” than it is to make the effort to discover the reason for inconsistent results.

We can think of brain serotonin as the quantum mechanics of biochemistry.

So what actually occurs?

Or is it really just like flipping a coin?

Fortunately, cause and effect still hold in our universe.

We still live in a deterministic reality, and something as simple as ethanol’s effects on serotonin can actually be reliably predicted.

But in doing so, it reliably increases the sleep-promoting compound tryptophol.

It does this by shifting the NADH∶NAD⁺ ratio (Feldstein, 1973).

(NADH and NAD⁺ are two forms of nicotinamide adenine dinucleotide – a coenzyme found in every single living cell.)

The early studies that showed this increase used the more reliable procedures of their day, performed by chemists.

The other early studies that showed the opposite were done by medical doctors using shortcut extraction techniques.

The studies purporting an increase of serotonin had been measuring serotonin and tryptophol together, which would show the apparent increase (as reported by DJ Palaić in 1971).

For instance, the largest increase of brain serotonin (56%) was reported by Bonnycastle, a medical doctor from Yale.

“A combined extraction method (MEAD and FINGER, 1961) permits the assay of both amines in one sample, but suffers a loss in sensitivity.” –Maikel

But this method also extracts 5-hydroxytryptophan and tryptophol, among others, with no attempt made to resolve them afterwards.

And these all show up together when detected using UV light.

Mead & Finger themselves admit that 5-hydroxytryptophan is also extracted by their procedure.

But, since this exists at very low concentrations, it can be neglected.

But tryptophol cannot be neglected.

And, at the time, scientists didn’t yet know that this occurs in the brain…

And they certainly didn’t know that ethanol predictably increases its concentration.

“It was reasonable then to assume that ethanol in man decreased 5-HIAA due to acceleration of the alternate pathway leading to 5-hydroxytryptophol and its conjugates.” –Feldstein

The better biochemists of the day all demonstrated a decrease in brain serotonin.

These people used a proper basic pH to extract the serotonin.

They followed that by a re-acidification to get it back into the water phase (separating out the tryptophol).

This leaves no ambiguity…

And studies using this method all show a decrease in total brain serotonin after ethanol ingestion.

If high-pressure liquid chromatography is the Cadillac of separation techniques, the Mead & Finger extraction method would be the Honda Accord.

And should a person speak of “paradoxical effects” of ethanol and serotonin, you can probably take that as evidence of ignorance.

But there are a few more details to consider.

This most likely occurs because ethanol displaces it from binding sites (Palaić, 1971).

But the total amount always decreases because cerebrospinal fluid flushes away the released serotonin.

More importantly, the sleep-promoting tryptophol – which is more bioactive than serotonin in many respects – increases.

After all, they are both alcohols.

Tryptophol is like an indole with an ethanol attached. Sometimes it is even written as indole-3-ethanol (Seed, 1978).

While the initial serotonin release can explain the feeling delivered by the first few drinks, it takes tryptophol to convincingly explain the drunken and comatose states.

This is because it’s the only tryptophan metabolite that can produce sleep when given directly.

No other indole besides tryptophol and its derivatives can do this (Seed, 1978).

Tryptophol also explains how tryptophan will lead to drowsiness even though serotonin will not.

But most scientists still fixate myopically on serotonin – just serotonin and even more serotonin.

It is tryptophol, not serotonin, that causes the reduced glucose metabolism in the brain (Cornford, 1981):

So you don’t have to worry about a chronically imbalanced mind state from occasional drinking.

(2) A serotonin shift from the bound to the free state

“Ethanol in vivo in rats markedly decreased the conversion of serotonin-C¹⁴ to 5-hydroxyindoleacetic acid-C¹⁴ from 84% to 47% in liver homogenates with a concomitant increase in the formation of 5-hydroxytryptophol from 13% to 51%.” –Feldstein

But many foods will actually increase total brain serotonin concentrations by increasing the blood tryptophan ratio.

Tryptophan in the bloodstream is where all brain serotonin comes from.

The ratio of tryptophan vs its competing amino acids matters more to the process of brain uptake than total amount.

Among proteins, whey powder, soy protein isolate, and egg white do this the most powerfully.

And, perhaps surprisingly, even protein-free glucose or starch will do as much to modify brain serotonin as ethanol…

These foods all release insulin. And this hormone draws every amino acid out of the blood and into the cells.

Well, every amino acid besides albumin-bound tryptophan, which remains in the blood.

The tryptophan-enriched blood has more available tryptophan for brain uptake and serotonin synthesis.

Some proteins will increase brain serotonin, but drinking soda will do so even more.

So you have to worry just as much about what you mix with your ethanol as about the ethanol itself.

A Rum & Coke, for example, will do the same but will also increase the tryptophan available to the brain.

NEW 5-minute video shows men how to have Nirvana Sex 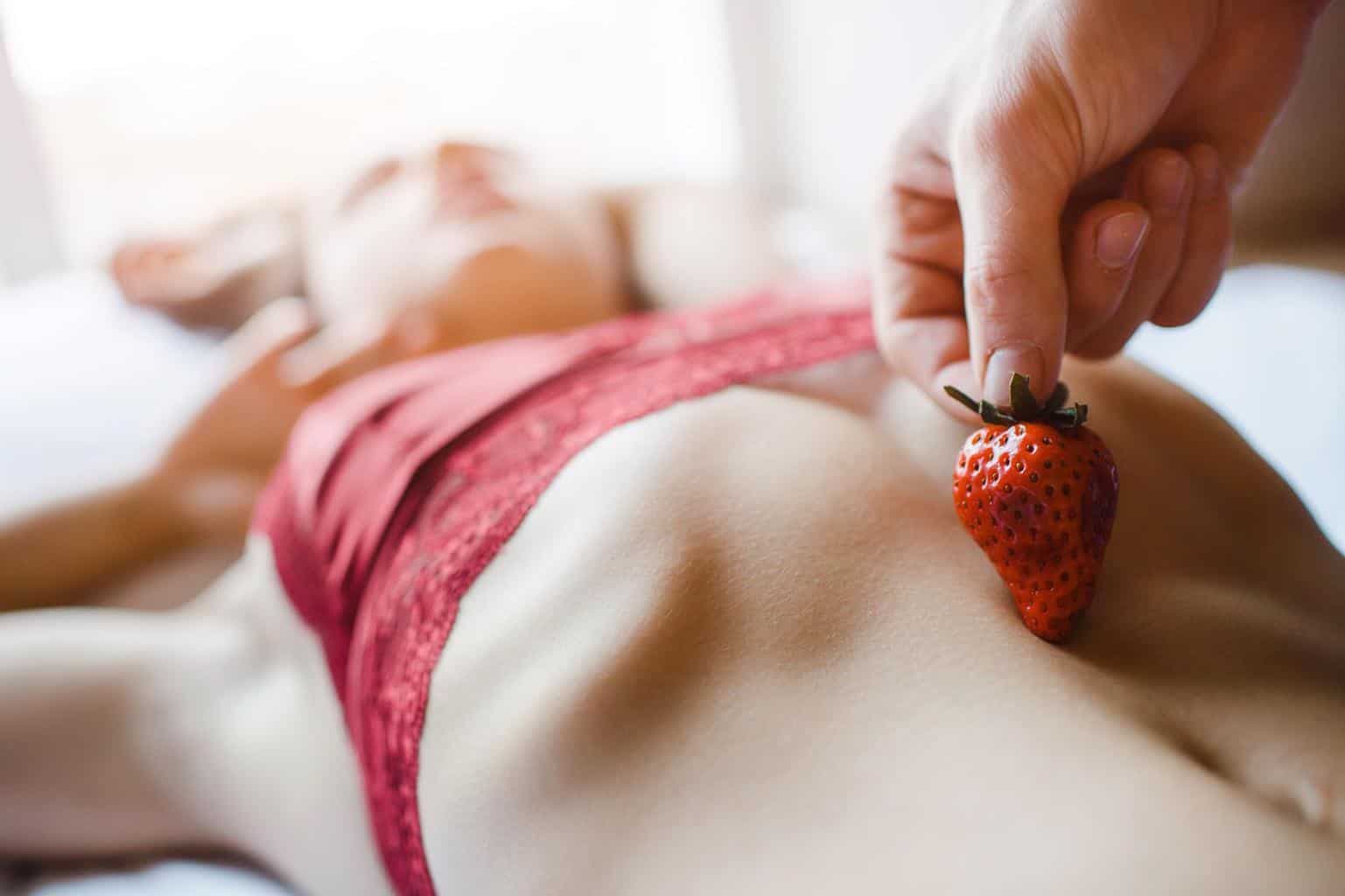 Matt Cook is editor-in-chief of Daily Medical Discoveries. Matt has been a full time health researcher for 26 years. ABC News interviewed Matt on sexual health issues not long ago. Matt is widely quoted on over 1,000,000 websites. He has over 300,000 daily newsletter readers. Daily Medical Discoveries finds hidden, buried or ignored medical studies through the lens of 100 years of proven science. Matt heads up the editorial team of scientists and health researchers. Each discovery is based upon primary studies from peer reviewed science sources following the Daily Medical Discoveries 7 Step Process to ensure accuracy.
Daily Medical Discoveries has strict sourcing guidelines and relies on peer-reviewed studies, academic research institutions, and medical associations. We avoid using tertiary references. You can learn more about how we ensure our content is accurate and current by reading our editorial policy. To continue reading about serotonin and other topics that pertain to men, click here. If you’d like further information, feel free to check out these references: