The models of cancer is that a tumor develops from some kind of mutation.

If you catch the tumor early enough, when it’s small, the surgeon can remove it.

And the cancer is now gone.

You don’t have to worry about it again.

But we know this is not true.

We call this metastasizing.

But even knowing it’s false, the mantra remains the same.

Remove the cancer or irradiate it to kill it.

Kill it, and it won’t come back.

If only this were the case.

This is what people believe about cancer, but it is not true.

First of all it’s been long established that cancer is actually a metabolic disorder.

It is not a random mutation.

The chances are that the cells can revert from cancer back to regular cells under the right circumstances.

This means that you need to catch cancer early and then raise your metabolism.

You need a very efficient metabolism to fight cancer.

But if you don’t catch it in your metabolism stays poor, cancer cells can build up in your body.

And if the surgeon finds and removes it, that’s still not the end of it.

Cancer is really a metabolic disease, so your metabolism may be producing more and more cancer cells.

Your body is still converting cells into cancer cells by virtue of poor metabolism. 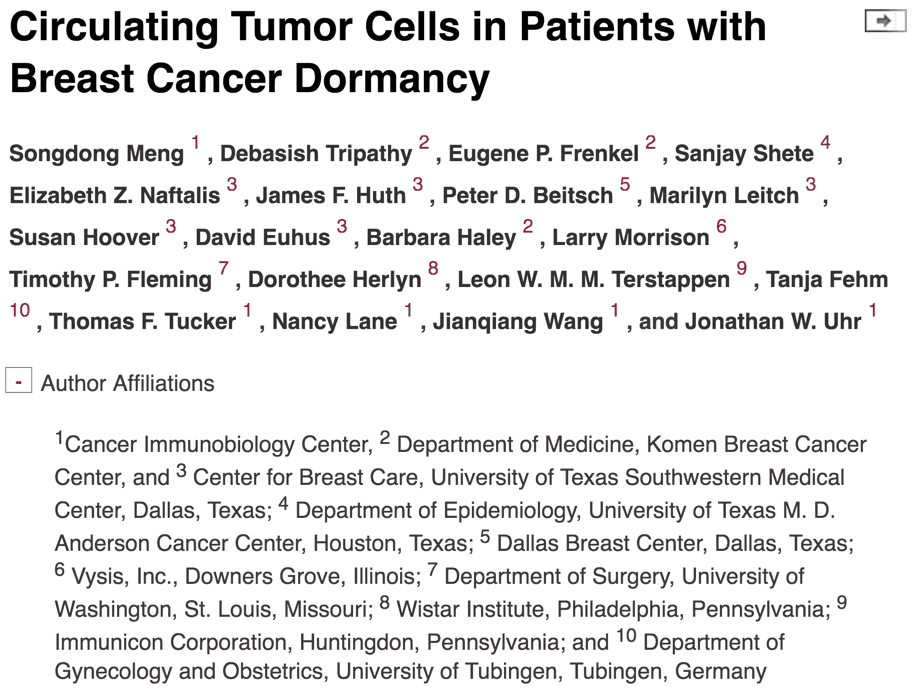 In this study they looked at breast cancer cells.

The researchers looked at women who had tumors removed 100% completely.

They found that cancer cells are continually circulating in the body.

They found them even over 20 years after the cancerous tumor was removed.

Remember, these were “cancer free” women.

They had had cancer in the past, and it had been removed fully and 100%.

And yet many of these women still have tumor cells in their bloodstream.

These circulating cells were

no such cells were found in the control group.

So we know this:

The  Researchers called this a case of tumor “dormancy.”

But there is no tumor to be dormant.

The tumor is gone.

There is no visible tumor and no recurrent tumors.

And yet, cancer cells continue circulating in the body.

It is possible that this is a phenomenon that is completely restricted to breast cancer — except that it’s not.

The same thing happens with all cancers.

The whole model of cancers being isolated tumors is wrong.

It’s been known since the 1930s the cancer is a metabolic disease.

We’ve known for decades that the cells become cancerous as a defense against very bad metabolism.

The treatment model today of irradiating, or burning, or poisoning the tumor or removing it, is wrong.

This treatment does not fix the metabolism that caused the cancer in the first place.

You have to fix the metabolism to get rid of cancer.

There’s no getting around that fact.

The whole medical model is so flawed today.

Instead of strengthening a cancer patient’s metabolism, they weaken it.

Radiation and chemotherapy weaken your metabolism at the worst time.

You need to be improving your metabolism and strengthening it.

The entire model of poisoning and burning the cancer cells is so completely wrong.

It suppresses your metabolism and destroys it when you need all the metabolic help that you can get.

There have been people who have cured themselves of cancer.

These have been isolated cases, or “the power of faith” or just written off.

But maybe they fixed their metabolic problems, and so cured their own cancer.

And they did it without radiation, chemical therapies, or surgery.

I’ll continue bringing new instances and examples of people who have gotten rid of their cancer.

I think it’s essential that you look at cancer as a metabolic problem rather than as a isolated runaway tumor.

It’s critical hat you fix the metabolic problem that causes the cancer in the first place.

See this for more on Cancerous tumors and see more on medicine, and for more information see effects of how healthy lifestyle reduces cancer.