This newsletter shows you the painful truth about weight loss.

And I’ll tell you how to get around the major weight loss problem.

If you have not been able to lose weight, you think it’s just laziness.

Or maybe you think it’s a lack of willpower.

If that’s the case, this newsletter will be an eye-opener that will change your entire life!

It will change your feeling about yourself, and even your entire self image.

The study we’re going to look at is fiendishly clever.

As Dr. Ludwig from Boston’s Children Hospital, a researcher (not part of this study) said after reading the study,

For most people, the combination of incessant hunger and slowing metabolism is a recipe for weight regain — explaining why so few individuals can maintain weight loss for more than a few months.

So with that ringing in our ears, here’s the study:

The researchers gave a group of weight loss patients a drug called Canagliflozin.

This drug causes the person to excrete 300 to 400 cal per day via peeing it out.

I’ll call this the “sugar peeing drug” because it makes you pee so much more than usual.

Keep in mind two things that are very important here.

Number one, each patient had no idea whether they were receiving the placebo or the sugar peeing drug.

And number two, there was no mental effects from the drug.

And it has no impact whatsoever on how you are feeling in any way.

Here’s the shocking and terrible news for dieters.

Here are two charts that show the problem.

As the patients lose weight (top chart) by taking the drug their appetite kicks in.

In fact, they eat two to three TIMES more calories than they are losing! 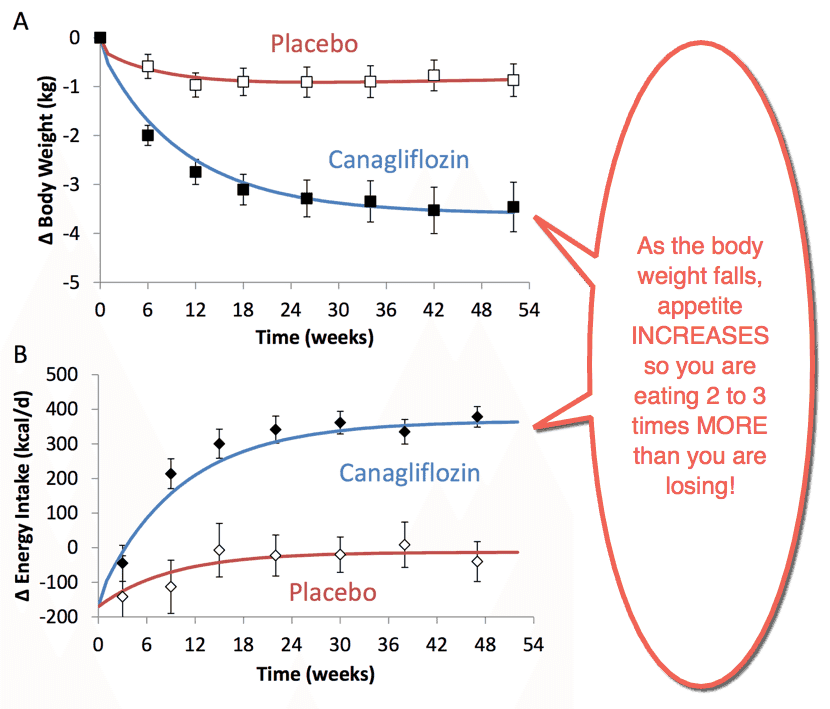 The result is that the longer people are on the weight loss drug, the more they’re eating.

This result has been duplicated over and over.

The body has extremely tight controls over how much it wants to eat.

It also knows how much weight it wants to wear.

If you lose weight by being hungry and reducing calories, two bad things happen.

The first thing is that you actually start digesting your own tissue.

Rather than just losing fat, you lose lean muscle.

All of your organs and your muscles shrink.

Even your brain loses cells when you’re on a low-calorie or reduced calorie diet.

The second thing is that metabolism just falls in general. and your appetite increases.

This is why reduced calorie dieting is so completely counterproductive.

The New York Times carried the story recently about the people on the popular show “the biggest loser”.

If focuses on how they are regaining the lost weight.

One of the researchers who worked on the study we just looked at was Dr. Hall.

Dr. Hall studied the biggest losers for six years after one of the seasons.

He found this striking observation as they report in the article:

When the show began, the contestants, though hugely overweight, had normal metabolisms for their size, meaning they were burning a normal number of calories for people of their weight.

When it ended, their metabolisms had slowed radically and their bodies were not burning enough calories to maintain their thinner sizes.

And the news for people on calorie reduction diets is even worse than that.

As the years went by and the numbers on the scale climbed, the contestants’ metabolisms did not recover.

They became even slower, and the pounds kept piling on.

It was as if their bodies were intensifying their effort to pull the contestants back to their original weight.

One of the contestants, Danny Cahill, gained 100 pounds after the show.

He was now at almost 300 pounds and struggling.

He was eating 800 calories a day LESS than a normal man his size just to avoid gaining even MORE weight.

As the article says,

The body fights weight loss years after you finish the diet.

Everyone quoted in the story, former Biggest Loser contestants, said they felt “cheated”.

“All my friends were drinking beer and not gaining massive amounts of weight,” Mr. Cahill said. “The moment I started drinking beer, there goes another 20 pounds. I said, ‘This is not right. Something is wrong with my body.’”

Sean Algaier, 36, a pastor from Charlotte, N.C., feels cheated. He went from 444 pounds to 289 as a contestant on the show. Now his weight is up to 450 again, and he is burning 458 fewer calories a day than would be expected for a man his size.

So now that we understand the problem, what is the solution to losing weight?

One of the things that I resent the most is the completely nonsensical and untrue assertion that you can’t be healthy and be overweight.

In fact, people who are overweight often live longer and healthier lives than thin people do.

And there’s a great deal of confusion between weight and health.

I have seen more health problems from men losing weight.

They have problems such as erectile dysfunction.

They generally have more health problems than men who are just content at their own weight.

And then there is the whole issue of diabetes and weight loss.

The idea is that if you lose enough weight, your diabetes will go away.

But it might not be the weight loss that helped.

It could be because you are losing the 1 gram of pancreatic fat that seems to be the cause of much of diabetes.

That gram of fat has been implicated in multiple studies as the culprit in diabetes.

If you don’t lose this tiny amount of pancreatic fact, losing any weight at all may not help you much.

The weight loss may not help you at all.

Then there is the liver and fatty liver disease to consider.

These hurt most people who are overweight.

They’re a problem because the liver is not storing enough glycogen or processing enough thyroid hormone.

So you may need to lose weight.

In fact, I found that many men are better off gaining weight first rather than losing weight.

This is true even if they’re already a bit fat or a lot fat.

It seems that eating more temporarily, but eating the right things, can raise your metabolism.

This is much better than dieting which lowers it.

Once you increase your metabolism, you can lose weight more easily.

The best way to lose the weight then is to eat healthier foods and get more active.

In this study they found that people gradually lose lean mass.

Just as I’ve been telling you.

They preserve themselves longer and are healthier than people who lose weight.

Those who gained weight either gained lean mass or lost it more slowly than the others.

Health and looks are all about preserving and growing your lean mass.

They have nothing whatever to do with just losing weight.

The only way to lose weight the right way is to raise your metabolism so you automatically lose weight.

And you can’t possibly raise your metabolism if you’re on a low calorie or calorie reduction diet.

Matt Cook is editor-in-chief of Daily Medical Discoveries. Matt has been a full time health researcher for 26 years. ABC News interviewed Matt on sexual health issues not long ago. Matt is widely quoted on over 1,000,000 websites. He has over 300,000 daily newsletter readers. Daily Medical Discoveries finds hidden, buried or ignored medical studies through the lens of 100 years of proven science. Matt heads up the editorial team of scientists and health researchers. Each discovery is based upon primary studies from peer reviewed science sources following the Daily Medical Discoveries 7 Step Process to ensure accuracy.
How strongly does appetite counter weight loss? Quantification of the homeostatic control of human energy intake
http://biorxiv.org/content/early/2016/04/29/051045

After ‘The Biggest Loser,’ Their Bodies Fought to Regain Weight
http://www.nytimes.com/2016/05/02/health/biggest-loser-weight-loss.html?_r=1