If you have normal Vitamin D levels, your libido may be suffering thanks to a recent study. You see, sometimes, a study comes out that makes you simply flip over it.

This is a study like that where we find that Vitamin D increases Libido.

How would you like to start taking Vitamin D that will make your libido increase and cause you to lose more pounds?

And, it will make you feel less anxious and just better all-around?

According to today’s study, you can do all of that with Vitamin D3.

You can take certain types of Vitamin D to raise libido and to lower obesity.

It seems that millions and millions of men are going about their business, with very low vitamin D3 levels.

They have no idea that these low Vitamin D levels are hurting their libido.

They have no idea that they could be taking vitamins to increase male libido.

This study explains why that is.

This study is done on mice, but there’s every reason to believe that it applies to people, too.

First of all, researchers found that mice eating a high-fat diet gradually developed a deficiency in vitamin D3.

The deficiency was significant, but not enough to develop rickets.

Rickets is a disease that occurs for those who have extremely low vitamin D3 levels.

So scientists never caught this more moderate deficiency as a problem.

It’s not low enough to cause any obvious effects.

But the Vitamin D level is low enough to cause obesity and libido problems.

This high-fat diet was extremely similar to what is called the “standard American diet.”

Food intake actually rises when you have a low vitamin D3 level.

And not only does food intake rise while a person has low D3, but it also causes the body lower the metabolism.

And so fat accumulates with low vitamin D3.

As if that weren’t enough, the study also found a tie-in between vitamin D3 and dopamine.

Dopamine is a hormone in our bodies that make us feel good.

It makes us feel motivated.

Dopamine makes us feel the drive necessary for getting our goals accomplished — including libido.

Serotonin is a hormone that causes a lot of weight related and inflammatory issues.

We have good reason to want to keep serotonin in check, and dopamine does that job well.

This in turn naturally increases testosterone.

This is great news because now we know that taking some extra Vitamin D can help us increase our libido.

It will also lower the amount of food that we want to eat.

With all that motivation and lowered appetite, we’re bound to lose excess weight.

So vitamin D3 is definitely good for our physical and even our mental health.

In fact, the study found that vitamin D3 even makes us less likely to want to reach for drugs. 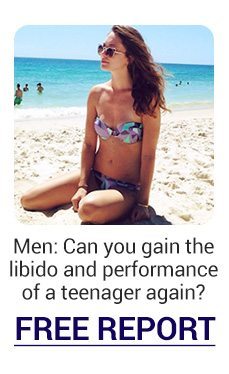 To test this, researchers actually gave rats access to amphetamine.

They’re addicted to the dopamine high.

The researchers found that mice with “normal” vitamin D3 levels (low levels) were more likely to want to consume amphetamines.

But when the vitamin D3 levels were corrected in these mice, the mice stopped wanting amphetamines.

Considering how much people attempt to “self-medicate” to feel better, this is a key find.

Many people reach for things such as tobacco or chocolate for the “good” feeling.

But what they don’t realize is that they’re attempting to raise their dopamine levels.

And it does work.

Ingredients in both tobacco and chocolate create higher dopamine levels.

But both tobacco use and too much chocolate can have adverse health effects.

It raises dopamine without calories or any of the multiple dangers of consistent tobacco use.

And the mice tell the story clearly.

Since their dopamine levels are already high, the mice had no desire to consume amphetamine.

So, how do you know if your vitamin D3 levels are low?

You can test for vitamin D3.

Most people have low levels, typically 10 or 20, and are considered normal.

But this study shows that levels that may be considered “normal” still causes huge problems.

By consuming some extra vitamin D3, we can short circuit these problems.

We can feel more satiated with food, feel more secure, and have a higher sex drive.

These sound like good reasons to find a good supplement!

Remember when you take vitamin D3 you should also make sure you consume plenty of calcium and vitamin K2.

Vitamin D3 and calcium need to be balanced in the body to work properly.

And the vitamin K2 tells your body to deposit the calcium into your bones rather than your soft tissue.

Taking vitamin D3 without vitamin K2 and calcium together is not a good idea.

Matt Cook is editor-in-chief of Daily Medical Discoveries. Matt has been a full time health researcher for 26 years. ABC News interviewed Matt on sexual health issues not long ago. Matt is widely quoted on over 1,000,000 websites. He has over 300,000 daily newsletter readers. Daily Medical Discoveries finds hidden, buried or ignored medical studies through the lens of 100 years of proven science. Matt heads up the editorial team of scientists and health researchers. Each discovery is based upon primary studies from peer reviewed science sources following the Daily Medical Discoveries 7 Step Process to ensure accuracy.
Daily Medical Discoveries has strict sourcing guidelines and relies on peer-reviewed studies, academic research institutions, and medical associations. We avoid using tertiary references. You can learn more about how we ensure our content is accurate and current by reading our editorial policy. To continue reading about vitamin d libido and other topics that pertain to men, click here. If you’d like further information, feel free to check out these references:
1. Is Vitamin D good for libido?
2. Can vitamin D increase testosterone?
3. Does vitamin D affect serotonin levels?
4. Does vitamin b12 help with libido?
5. How does vitamin D affect hormones?
6. How can I boost my testosterone fast?
7. Can low vitamin D effects hormones?
8. What can I take to increase my libido?