The number of cases of diabetes has been climbing in great numbers for decades.

As the Centers for Disease Control says, the number of cases of diabetes has gone up fourfold over the past 30 years. But why is it happening?

A lot of people feel that sugar is responsible for the increase in diabetes.

However, sugar consumption has leveled off dramatically: If sugar were the culprit, then its plateau would also mean a plateau in the number of cases of diabetes.

But that hasn’t happened.

Diabetes has not leveled off, instead, it’s still climbing.

But there is something else that has not only not leveled off — but has increased DRAMATICALLY.

And that is consumption of polyunsaturated fatty acids — or PUFAs. 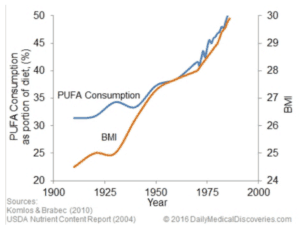 In fact,  there is very persuasive evidence that the cause of diabetes is the inflammatory PUFAs.

And PUFAs are everywhere!

In this study, researchers found that mice did not get diabetes unless they had PUFAs in their diet.

The average person in the Western world eats vast amounts of PUFAs.

Never before in history has there been as much PUFA consumption as there is today.

A so-called essential fatty acid deficiency is a good thing.

As we get older, we accumulate more and more essential fatty acids from the PUFAs that we eat.

Our diets have far too many PUFAS in the form of soy, nut, fish, canola, and other vegetable oils.

But there are dangers to canola oil and other plant and fish oils.

These PUFAs accumulate and cause inflammation in our bodies — particularly in our guts, even in our brains.

This inflammation causes leakiness in our gut and circulatory system.

Rats that did not eat high amounts of PUFAs maintained strong blood vessels.

They were more protected against leaky gut issues.

Because of this and other studies, we know that PUFAs are to blame for many issues we face.

There is nothing that is more likely to cause sickness and diabetes than the amounts of fish and vegetable oil that are in our diets today.

These can lead to diabetes, congestive heart failure, and vascular disease.

Eliminating these PUFAs from your diet as much as possible is the healthiest move you can make.

Matt Cook is editor-in-chief of Daily Medical Discoveries. Matt has been a full time health researcher for 26 years. ABC News interviewed Matt on sexual health issues not long ago. Matt is widely quoted on over 1,000,000 websites. He has over 300,000 daily newsletter readers. Daily Medical Discoveries finds hidden, buried or ignored medical studies through the lens of 100 years of proven science. Matt heads up the editorial team of scientists and health researchers. Each discovery is based upon primary studies from peer reviewed science sources following the Daily Medical Discoveries 7 Step Process to ensure accuracy.
Number (in Millions) of Civilian, Non-Institutionalized Persons with Diagnosed Diabetes, United States, 1980-2014
https://www.cdc.gov/diabetes/statistics/prev/national/figpersons.htm