Listen… This goes way deeper than I ever imagined…

Unfortunately, you may have to ask this question every time you drink a cup of well water in the United States.

(This is probably happening in other countries too, but I haven’t seen studies on that yet.)

…it’s no surprise that between what we pee out and what we throw away, these drugs are ending up in our water supply.

But how much of this crap is out there – and does it impact your health?

Pharmaceuticals are leaching into our water supply

The graph below shows you exactly what’s happening.

We’re taking these drugs – everything from Tylenol to antipsychotics – and we are either throwing them away or peeing and pooping them into the water system.

Either way, these drugs end up in our septic tanks and municipal water supplies…

And then they leach into our groundwater – and they DO NOT degrade through our current systems (that’s bad). 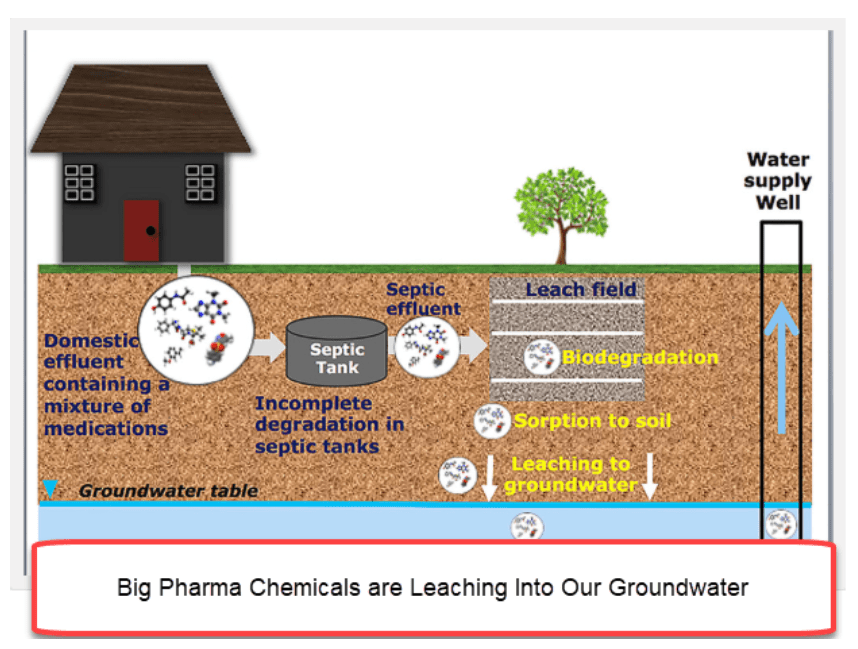 It seems that nobody is immune from this contamination…

In this study, every single well was contaminated with at least one pharmaceutical compound.

Seriously, not a single well was completely clean of contamination from Big Pharma drugs.

“At least one compound was detected at all sites. Ofloxacin and sulfamethoxazole – antibiotics prescribed for the treatment of a number of bacterial infections – were the most frequently detected compounds.”

I don’t know about you, but that does not make me feel confident about my water supply.

And that is mostly because of the worst contaminant: antibiotics (even though there is other bad stuff happening as well…).

This seems really dangerous to me…

Even if these drugs aren’t interacting in my body right now, they are contributing to our antibiotic resistance problem throughout the population.

Yeah, we’re talking about the “superbugs” that are getting harder and harder to kill…

And in this study, all the wells tested had at least one bad compound…

Up to six different pharmaceuticals were detected in some of the groundwater supplies tested.

“As many as six of the analyzed pharmaceuticals were detected in some groundwater samples.”

This combining of pharmaceuticals poses the biggest risk.

…having so many different types of compounds in the water supply could have compounding effects in the body that we don’t really understand yet.

“There remains a major concern that even at low concentrations, pharmaceuticals could interact together and influence the biochemical functioning of the human body, so even at very low concentrations they might have some kind of synergistic effect…”

What we do know for sure is that when people take too many prescribed or over-the-counter drugs at the same time, it can have severe negative health effects, including early death.

“…range of concentrations and potential health risks are not yet well understood, especially for these private groundwater supplies.”

Unfortunately, this is a growing problem that doesn’t seem like it’s going away any time soon.

There is more and more evidence that a huge portion of our drinking water has been contaminated by these drugs.

In the United States, at least half of the population gets their water from groundwater aquifers.

“It is estimated that half of the population accesses potable water from groundwater aquifers.”

But the groundwater is not the only problem because they’ve also found significant concentrations of pharmaceuticals in bay water and other water supplies.

Clean water is one of the most important requirements for living a long and healthy life.

If you don’t have clean and safe water, your chances of living the longest life you can go down significantly.

It’s a good idea to research and install a quality water filtration system at point of use in your house.

That way you can get rid of anything that can’t be caught by the municipal or well water system you have.

I’m not thrilled that Big Pharma chemicals are in my water supply.

But I take responsibility for the water I drink and I make sure it’s filtered correctly.

You probably should too… It’s not difficult.

Here’s the brand new video showing you how to get great erections, even if you’ve been struggling for years… 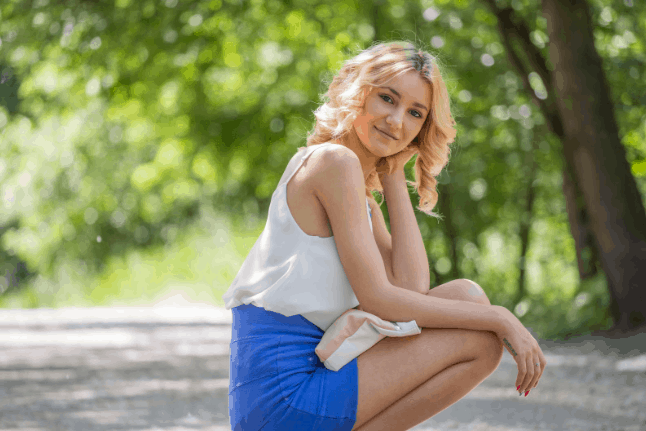 Matt Cook is editor-in-chief of Daily Medical Discoveries. Matt has been a full time health researcher for 26 years. ABC News interviewed Matt on sexual health issues not long ago. Matt is widely quoted on over 1,000,000 websites. He has over 300,000 daily newsletter readers. Daily Medical Discoveries finds hidden, buried or ignored medical studies through the lens of 100 years of proven science. Matt heads up the editorial team of scientists and health researchers. Each discovery is based upon primary studies from peer reviewed science sources following the Daily Medical Discoveries 7 Step Process to ensure accuracy.
Daily Medical Discoveries has strict sourcing guidelines and relies on peer-reviewed studies, academic research institutions, and medical associations. We avoid using tertiary references. You can learn more about how we ensure our content is accurate and current by reading our editorial policy. To continue reading about water contamination and other topics that pertain to men, click here. If you’d like further information, feel free to check out these references: