You won’t hear this from anybody else, so make sure you read this carefully.

This is about how very low dosages of common antibiotics may relieve depression and cure many diseases having nothing to do with killing bacteria.

Many years ago it was discovered that small amounts of tetracycline help to get rid of diseases that had nothing to do with bacteria.

The tetracycline was administered in doses way too small to get rid of bacteria, so an anti-inflammatory effect was discovered.

It turns out the tetracycline and especially its cousins minocycline and to a lesser extent, doxycycline, are powerful anti-inflammatories and even antidepressants.

You can see many of the activities of these common antibiotics in this chart: 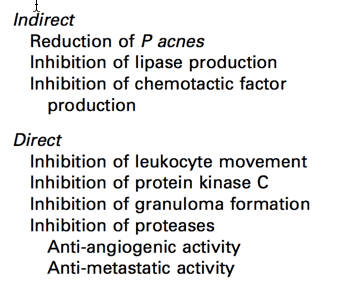 Would you have thought that tetracycline and its cousins would assist in depression?

IT HAS ANTIDEPRESSANT-LIKE NEUROPROTECTIVE AND ANTI-INFLAMMATORY ACTIONS AND MINOCYCLINE HAS BEEN SHOWN TO PERFORM AS AN ANTIDEPRESSANT.

There are many people who have taken minocycline or doxycycline and have found amazing results for their depression.

There haven’t yet been a lot of studies, but there have been some.

It is definitely worth trying out if you’ve been depressed for a long time and medications don’t seem to help.

The doses are often very small, and sometimes given only several times a week rather than every day.

Even if they’re given every day, the meds that are given are a fraction of the dose that’s given for treating a bacterial infection.

I believe that antibiotics have mechanisms of action that are far different from what has been commonly thought for a long time.

They actually exert metabolic effects, and it is even possible that their antibacterial effects are much smaller than we have always supposed.

A GROWING BODY OF EVIDENCE ALSO SUGGESTS THAT DYSREGULATION OF INFLAMMATORY PROCESSES MAY BE A MAJOR PATHOPHYSIOLOGICAL MECHANISM OF MAJOR DEPRESSION (E.G., CYTOKINES PLAY A MAJOR ROLE IN BRIDGING THE NERVOUS AND IMMUNE SYSTEMS).

Cytokines are molecules that the beacon that the immune cells follow to find infection, inflammation, and traumas.

These cytokines include tumor necrosis factor alpha, among others.

When a person is depressed, these cytokines are elevated greatly.

And they tend to correlate with inflammatory processes that destroy our health, make our gut leaky, and cause depression.

It seems that tetracycline, doxycycline, and minocycline can help restore normal metabolism.

These are almost miracle drugs, but unfortunately, their use is being hampered by the current frenzy against antibiotics.

They give confined animals in feedlots massive amounts of antibiotics for their entire lifespan, but the moment a doctor tries to prescribe “off label,” then the standard of care rears its ugly head.

The doctor can get himself in trouble if he prescribes antibiotics for any reason other than a diagnosed bacterial infection.

This is really slowing down the adoption of some of these miracle antibiotics for purposes for which they are extremely well-suited, and where no other medications seem to work.

There is ample evidence that tetracycline, minocycline, and doxycycline are all potent anticancer agents without a lot of the side effects of conventional chemotherapy today.

Why haven’t you heard about these miracle antibiotics used in this unique way?

Perhaps it’s because these are dirt cheap and not patented anymore.

The drug companies are working on chemotherapy that cost tens of thousand dollars and prolongs life a few months, rather than researching common compounds such as tetracycline that have already proven miracle properties.

This study shows that these antibiotics

APPEAR TO RESULT IN THE NET EFFECT OF REDUCED INVASIVE AND METASTATIC ACTIVITY.

One of the most interesting discoveries about these antibiotics is that they help prevent the breakdown of collagen in the tissues that sometimes happens in tumors.

Collagen is the primary way that the body holds itself together.

And in cancer and many other diseases, collagen starts to break down.

It seems that these antibiotics reduce or eliminate this effect of collagen breaking down.

What to do next?

Talk to your doctor about these miracle antibiotics if you have depression that can’t be resolved with other medications, or if you have cancer, or if you have some kind of a disease that doesn’t seem to be responding to conventional treatment.

Candidates include arthritis, depression, mystery ailments, irritable bowel syndrome, and even perhaps prostate inflammation that can’t be resolved through other means.

You might be surprised how easily that it can be made to go away with these miracle antibiotics.

Matt Cook is editor-in-chief of Daily Medical Discoveries. Matt has been a full time health researcher for 26 years. ABC News interviewed Matt on sexual health issues not long ago. Matt is widely quoted on over 1,000,000 websites. He has over 300,000 daily newsletter readers. Daily Medical Discoveries finds hidden, buried or ignored medical studies through the lens of 100 years of proven science. Matt heads up the editorial team of scientists and health researchers. Each discovery is based upon primary studies from peer reviewed science sources following the Daily Medical Discoveries 7 Step Process to ensure accuracy.
Daily Medical Discoveries has strict sourcing guidelines and relies on peer-reviewed studies, academic research institutions, and medical associations. We avoid using tertiary references. You can learn more about how we ensure our content is accurate and current by reading our editorial policy. To continue reading about antibiotics and other topics that pertain to men, click here. If you’d like further information, feel free to check out these references:
1. Can antibiotics cause depression?
Some men will become depressed when they take antibiotics. There is no consensus as to why some men become depressed with antibiotic intake but one reason can be what is called die-off reaction. Or Herxeimer’s reactions. Antibiotics kill off  various bacteria that are in the gut and in the rest of the body, and these bacteria may actually be affecting your mood. Killing them off may temporarily overwhelm your liver and its ability to clear out these dead bacteria. That could cause depression and mood problems.
In addition, the balance of bacteria in your gut will change in the change balance may affect your mood.
On the other hand, antibiotics can be strikingly helpful for many mood disorders, anxiety and depression. If you can get past the initial. It may be the best thing that you have ever done if you have chronic anxiety and depression. Always talk to a doctor about antibiotics and take them with your doctors blessing. You may have to work hard to find a doctor who recognizes the value potentially of antibiotics in depression or anxiety.
Many antibiotics specifically tetracycline, minocycline and doxycycline are extremely anti-inflammatory. It is thought that anxiety and depression may be partially an inflammatory condition in the brain and nervous system. This is why small low dosages over a period of time of these antibiotics may in many cases fix anxiety and depression.

4. Can doxycycline help fix irritable bowel syndrome?
Doxycycline may actually make irritable bowel syndrome worse taken by itself. It may be a poor choice alone of antibiotics in the event you have IBS.
However new evidence has shown that together with the yeast called Saccharomyces Bullard he, doxycycline may be a choice for certain types of colitis, inflammation of the colon. Saccharomyces Boulardii he is available in capsule form and is a type of yeast that doesn’t colonize the gut but helps to control many other bad parasites, cysts, and bacteria in the colon. Doxycycline and S Boulardii, taken at the same time, both together may actually alleviate irritable bowel syndrome and colitis symptoms in some cases.

5. How are doxyclycline depression related?
Past Medical studies have shown that doxyclyline might cause mood difficulties and suicide ideation in Individuals, even in cases where they might have been treated for totally different health disorders e.g skin conditions. But no direct link has been found where use of doxycycline have induced psychiatric events like agitation, anxiety, depression, abnormal thinking and self-injurious behaviours leading to suicidality.
In the same vein, it has also been found that doxycycline or minocycline is shown to have amazing results for depression when administered in very low doses. Since these are administered a few times a week compared to a daily dose, the side effects if any are efficiently mitigated.
New research studies have shown that a common antibiotic like doxycycline has antidepressant qualities, commonly prescribed for skin infections like acne and dermatitis, and also as a preventative measure for malaria in some countries. Very low doses of doxycycline have been found to block negative thoughts and anxiety in the brain and thus might be a help for ailments connected to PTSD ( Post Traumatic Stress Disorder).
Though mainstream medical studies are yet to support this, researchers say that doxycycline blocks certain proteins outside nerve cells which are used for creating memories. This could open new research methodologies to find ways to shift memories of fear or a painful experience so that later effects like depression or suicidal thoughts can be stalled.
The ability of doxycycline in helping maintain normal metabolism is documented well but this is not well spoken by the medical fraternity. But with new research and studies that is increasingly pointing at the myriad advantages of antibiotics like doxycycline for treating PTSD, a more informative look on this topic is necessary.

6. Should you use antibiotics for depression?
Recent studies have shown that Minocycline which is frequently prescribed for acne might help in addressing the life challenges of people suffering from major depressive disorders. As a adjunctive therapy for depression, the metabolic effect of these antibiotics like Minocycline or doxycycline may not have been well documented until now.
According to studies by the National Institute for Health Research ( NIHR ), patients administered with Minocycline for schizophrenia who had infections, had found improvements in their psychotic conditions. Researchers believe that depression may be caused by the Inflammatory processes in brain cells thus the role of Minocycline as a anti-inflammation medicine becomes very productive.
These Inflammatory  processes causes the gut to leak and play havoc on health,thus also causing depression.The neuroprotective qualities of Minocycline and its anti-inflammatory aspects may thus play a important role in the unusual development of psychotic functions in patients who might have had problems before.
This calls for a more re-defined approach to the way “Antibiotics are seen as problem makers”.