Often people have ringing of the ears, or tinnitus.

This newsletter is about you.

The ringing in your ears can be an unpleasant buzz.

It can be a very loud siren noise.

It can even be a high pitched tone.

Regardless, tinnitus can be extremely annoying and disruptive to your quality of life.

There are lots of theories as to what causes tinnitus.

But here you will find the theory that is most likely correct — and you’ll see how to eliminate tinnitus.

It seems that tinnitus is caused by some kind of issue in the body’s endogenous opioids.

What the heck? Endogenous opioids?

Endogenous opioids are an opioid-like substance that the body makes to help combat pain.

An example of an endogenous opioid would be endorphin.

They are one of the mechanisms that help us deal with not just getting high when we have opium.

But they also help us cope with infection and bacterial endotoxins. 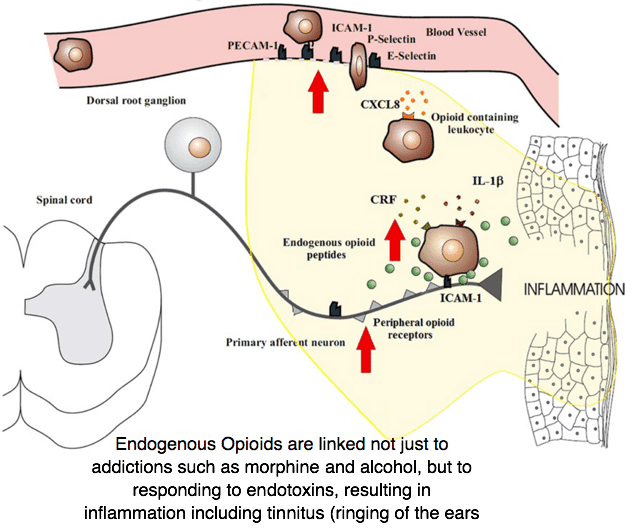 A while ago scientists found a drug called naltrexone.

They give this drug to addicts to help them get over opium addiction.

And they also use various doses of naltrexone to treat many other things — drinking alcohol for example.

It may be much easier to quit drinking if you’re taking some naltrexone.

Naltrexone helps reduce or eliminate cravings from addiction to alcohol and drugs.

It even helps to eliminate food cravings.

Naltrexone is what they call an antagonist to the endogenous opioid receptors in the body.

This means that it opposes the opioid receptors and blocks the effects of other substances.

This may be why naltrexone is very useful for tinnitus.

Tinnitus may be caused by activating the endogenous opioids system in the body.

Tinnitus often only occurs in one ear.

Or it can be worse in one ear than the other.

Endogenous opioid systems in the body are often asymmetric.

This means that things affected by these systems can be worse on one side or the other.

It can even mean that the issues is nonexistent on one side but bad on the other.

In the study, they gave a large group naltrexone in various doses.

They gave a smaller group no naltrexone at all.

All of the people in the study had tinnitus.

The people getting in the largest dose of naltrexone, 50 mg per day, reported substantial improvements in their tinnitus.

The people that got lower doses of naltrexone, or no naltrexone, did not report any improvement.

One of the problems with this study is that it wasn’t done double-blind.

This is a huge flaw in a study like this in order to avoid a placebo effect.

A study like this should be completely blind so that the patients can’t inadvertently affect the results.

Nevertheless, it does seem like a valid possibility that naltrexone helps tinnitus.

And if it does, it further reinforces the cause of tinnitus which I believe is bacterial endotoxins.

Let’s look a little bit more at this theory.

If we know what causes tinnitus, we can develop some dietary, nutritional and supplement advice that may help eliminate it.

And it may help you even if you don’t want to or can’t take naltrexone.

The endogenous opioid system is part of our defenses against endotoxin.

And in fact, if you take naltrexone, it helps depress the activity of endotoxins on the body.

It can save your life.

In this study, they gave rats endotoxins.

They used Lipopolysaccharides (LPS), which is a potent form of endotoxins found in our gut.

The mice got a fever and got very sick.

But the mice that were given naltrexone did not get as sick, and were able to survive.

By the way, if the mice were given the LPS endotoxins AND they had morphine, they would get sick, even with naltrexone.

Morphine seems to prevent naltrexone from doing its work.

Also, morphine seems to be a bad thing as far as endotoxins are concerned.

Administration of the opioid antagonist naltrexone protected mice from shock induced by LPS, a protective effect that was reversed by morphine.

You might want to discuss naltrexone with your doctor.

Naltrexone has a long history of safety, proven over decades.

It seems that the 50 mg dose is the only dose that actually is effective against tinnitus.

At least, that’s the dose found effective with this study.

But even better, you can adjust your nutrition and your supplement regime in order to reduce the effect of endotoxins.

Endotoxins are probably the greatest challenge that we have in our bodies.

This challenge limits our lifespan and causes us to have premature aging.

Endotoxins indirectly cause diabetes, and probably most other diseases.

And now it seems, endotoxins may likely cause tinnitus.

It could be that fixing the endotoxin problem will fix the ringing in your ears.

The effect of naltrexone on the perception and distress in tinnitus: An open-label pilot study
http://cat.inist.fr/?aModele=afficheN&cpsidt=27096449

See this for more on buy sildenafil 100mg, and see more on ambien teva, and for more information see effects of cialis daily vs regular cialis