These men ate pizza, cookies, burgers, fries, and anything else they wanted for 5 days straight – here’s what happened to them…

I defied my doctors with this “dangerous” testosterone experiment

One of the first health experiments I ever conducted on myself landed me an interview with ABC News.

This experiment put me on the map as a professional health researcher and completely turned my life around.

Should you try this “overeat for 5 days in a row” diet?

I love holidays. Especially holidays that revolve around food – like Thanksgiving here in America.

And I used to feel SO guilty when I would sit down at the meal and eat turkey and stuffing and all the fixings of a traditional Thanksgiving feast – because I ate so much.

But this guilt trip is just one more thing that the research I do every day has pretty much debunked.

It’s not that overeating isn’t bad. It’s not a good idea to overfeed yourself on a regular basis.

On the other hand, starving yourself by massively cutting calories has its own major set of problems.

But the reality is that humans have been feasting for short durations during celebrations and holiday times for thousands of years. Probably since we’ve existed.

Because of that, it turns out our bodies are pretty well adapted to this cycle of “feast” eating…

So there is no need to feel guilty for eating a lot during “feast” seasons.

This is great news for me because I really love food during the holidays…especially a great lamb roast.

This study had people “overfeed” for 5 days or 28 days – the difference is remarkable.

This was a small study, but it’s consistent with patterns I’ve seen with my students and with myself.

In this study, they divided a group of healthy young men into two groups.

The first group overate for 5 days and the other for 28 days.

“Researchers from Deakin University in Australia studied a small group of healthy, lean men with an average age of 22. Volunteers participated in a short-term trial consisting of five days ‘indicative of humans overeating during festivals and holidays’ and a long-term model of chronic overeating lasting 28 days.”

As you would think, the men who chronically overate for the 28-day period ended up gaining weight.

They also ended up with blood sugar problems – which can be an early sign of diabetes.

But the men (who were fit to begin with) who only overate for 5 days, didn’t have a problem with gaining weight or with their blood sugar levels.

“Although the amount of visceral fat that surrounds internal organs increased substantially, short-term overeating did not have a significant effect on the men’s weight or fat mass. In addition, fasting levels of blood sugar and C-peptide – an amino acid the body releases in response to increased production of insulin – did not change.”

Although it did add to the fat surrounding their organs, my guess is that (though this study didn’t say so) that fat went away pretty quickly as they returned to normal eating patterns.

So this tells me that if I occasionally overindulge at holiday times it’s okay.

My body can normally handle that, especially if I’m healthy to begin with.

But what I’ve been saying about regular consumption of too much fat is still true.

Even though the men on the overeating regimen did gain weight, their ability to process glucose remained the same – although it would probably get worse if they sustained this level of food intake.

“However, it did not alter fasting blood sugar levels, endogenous glucose production or the rate of glucose removal from the body (glucose disposal). This may be because the nutrient profile in the long-term trial was consistent with a typical diet and dietary fat percentages did not increase.”

The researchers believe that this is because they didn’t have a lot of extra fat in their extra calorie intake.

“Long-term overindulgence in fatty foods, instead of more nutritionally balanced foods, may be an important factor that causes rapid changes in blood sugar control.”

The bottom line is that eating too much over a sustained period of time is bad for your health and can cause negative metabolic changes.

And adding a high-fat diet to that mix can speed up the negative effects.

If you’re trying to change your eating patterns, it’s a good idea to lower your fat intake first.

THEN start eating less food gradually (but don’t ever starve yourself by going super low-calorie).

This way, you’ll start getting health benefits right away. And it’s much easier than trying to adjust everything at once.

And, again, if you want to indulge short-term on holidays, then go ahead. It’s not likely to hurt you in the long run.

This simple smoothie restores a teenage metabolism, so men can eat what they want without gaining fat

See this plate? See how the oil congeals into a hard-to-clean mess? 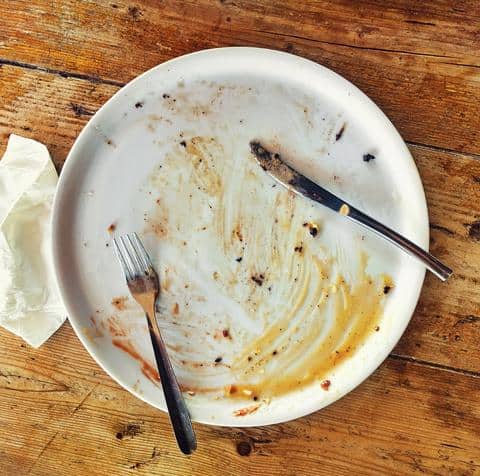 Well the same thing happens inside the bodies of mature men…

Most men over 45 have slower, colder metabolisms. And the toxic oils stay there for years, building up into huge globs.

No wonder these men can’t lose weight and feel exhausted and weighted down. It’s from years of eating toxic oils!

But when you warm up the plate by putting it under hot water, the oil melts and comes right off…

And the toxic oils in a man’s body melt the same way when he heats up his metabolism.

So to increase metabolism, I make this simple smoothie that flushes out all of that nasty, old oil residue from my system.

The drink warms up and speeds up my metabolism, and all that nasty oil is gone within a day.

Once you try it, you’ll be shocked at how much weight you lose and how much energy you have – and extra stamina for the woman in your life!

Here’s the simple smoothie that cleans out the gut and restores a teenage metabolism.

Matt Cook is editor-in-chief of Daily Medical Discoveries. Matt has been a full time health researcher for 26 years. ABC News interviewed Matt on sexual health issues not long ago. Matt is widely quoted on over 1,000,000 websites. He has over 300,000 daily newsletter readers. Daily Medical Discoveries finds hidden, buried or ignored medical studies through the lens of 100 years of proven science. Matt heads up the editorial team of scientists and health researchers. Each discovery is based upon primary studies from peer reviewed science sources following the Daily Medical Discoveries 7 Step Process to ensure accuracy.
Daily Medical Discoveries has strict sourcing guidelines and relies on peer-reviewed studies, academic research institutions, and medical associations. We avoid using tertiary references. You can learn more about how we ensure our content is accurate and current by reading our editorial policy. To continue reading about overeating and other topics that pertain to men, click here. If you’d like further information, feel free to check out these references: