The study used data from men who were donating sperm at a sperm bank.

This was very convenient for the study authors.

But it also means that the study only covered younger men.

The men were quite young — just 20 years old.

And the men who were sperm bank donors were the active study group.

The researchers then compared the hormone levels between these two groups.

Most men think that testosterone is produced in the testicles.

But that’s not how it works.

The authors point out that most testosterone is actually produced in the adrenal glands.

And researchers saw that all of the adrenal hormones shot up in the sperm donor group.

So the group that masturbated had an increase in all of the adrenal hormones. 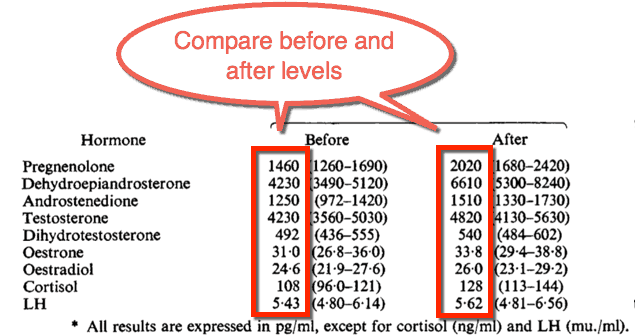 But more about that in a moment.

All of the adrenal hormones went up.

For example, allopregnanolone went up quite a lot.

Estrogen went up a bit.

You may notices that they spell it oestrone and oestradiol here.

This is the British spelling for estrone and estradiol.

These are two forms of estrogen.

And cortisol levels go up a lot.

But here is a very surprising fact hidden in the results.

They noticed something different about the men who masturbated for a longer period before ejaculation.

Testosterone levels for these men did not rise very much.

Sometimes they even stayed the same… or even fell.

In edging, the man masturbates short of ejaculation.

He does this repeatedly and maintains a aroused state for a long time, often hours.

It seems like this would raise testosterone levels rather than lower them.

But that wasn’t the case.

But I’ll discuss that with you at another time.

What are we to make of this?

Partner sex is probably the most important activity that you can have in your life.

Anything involving people, especially women, is incredibly healthy and valuable.

It can be any activity such as dancing, socializing, hiking… anything at all,

It may not be a bad thing if you only do it now and then.

But only if you’re alone and have no other choice.