This newsletter reveals some key points about aging, testosterone, and having more sex.

So, play close attention if you want to have more sex as you get older. 🙂

In this study, they examined the sex lives of numerous older men.

They also measured how much partner or solo sex they had these men had.

And then the researchers added it all up.

They came to some pretty interesting conclusions.

The only thing high testosterone correlated with is having more sex.

These men averaged a testosterone rate of around 500.

I’m mentioned this many times — testosterone rates do not have to decline as you get older.

In a normal man, testosterone rates do not decline appreciably.

And in fact, the men just over 60 had similar testosterone rates to the 79-year-old men. 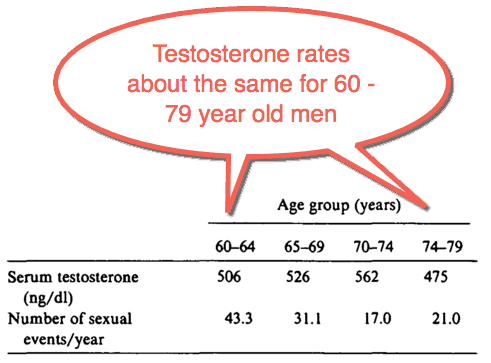 And notice how much sex these people were having!

This number supposedly includes both partner sex and solo sex, although I have my doubts.

So it’s doubtful that they reported all occurrences it to the researchers.

Although that may not be true — we just will never know.

And the number of sexual events declined to half by the time the men reached the 74 and older range.

And here’s a very telling fact.

47% of the men had occasional or regular erectile dysfunction — and it didn’t matter what their testosterone levels were!

The only thing that higher testosterone levels cause, it seems, is more sex.

Men who had higher testosterone levels despite age would have more frequent sex.

But the incidence of erectile dysfunction was the same with all these men regardless of testosterone levels, about 47%.

The researchers wondered if there was a relationship between weight and the data.

Were heavier men less likely to have sex than the more trim men?

Did the fat men have less sex and the buff guys have more sex?

The answer will surprise you. 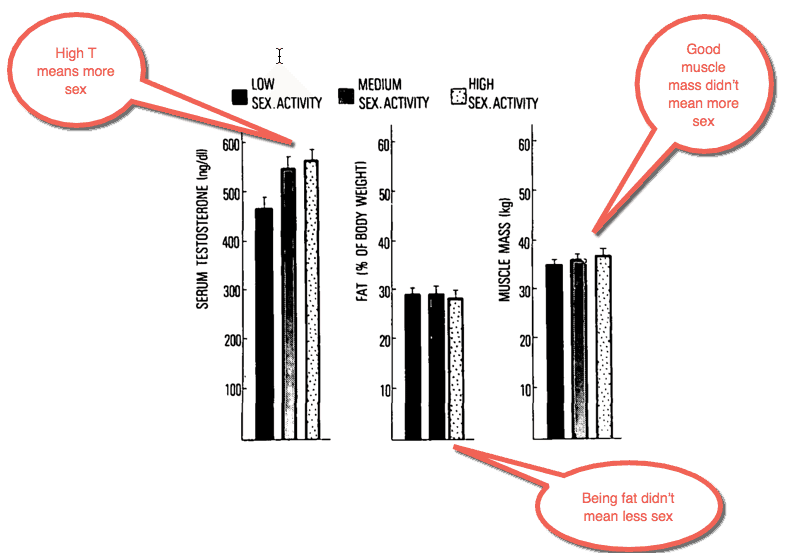 Having good muscles did not mean more sex.

The only thing that meant more sex was having higher testosterone levels.

I believe there are many studies that show an important truth.

The more sex you have, the better for you, your health, your mind and your quality of life.

And to a great extent, sex is about “use it or lose it” as you get older.

Did higher testosterone levels result in having more sex?

Or did more sex result in higher testosterone levels?

It is entirely possible that the men having lots of sex caused their own testosterone levels to rise.

Having frequent sex is a great promoter of testosterone.

This is especially true if you have sex short of ejaculation.

Ejaculation seems to lead to a declining testosterone level for about a week.

And it seems to have a greater effect on older men.

Although we can’t really say that for sure from this particular study.

So my takeaway here is this.

Do whatever you can to make sure you’re having lots of sex as you get older.

An active sex life will slow down your aging.

It will keep your testosterone levels higher, which is very healthy for men.

And it’s certainly a great reason to live a long life!

See this for more on Testosterone & Sexual Activity, and see more on Anti-Aging, and for more information see Vitality and Relationships.