In an injured liver, there are going to be a lot of problems.

I  am often asked about the effects of alcohol on the human body.

For many years, it’s been trendy for doctors to recommend alcohol, as supposedly being protective to the heart.

They’ve been recommending a glass of wine or two a night.

What could be better for the heart than relaxing and having a glass of wine?

That may be okay, but alcohol is estrogenic.

And a new study shows that alcohol is especially harmful when combined with polyunsaturated fatty acids, or PUFAs.

These are found in vegetable oil, nuts, fatty fish, and fish oil supplements.

Then, they gave the mice alcohol.

The worked up to giving them the equivalent of about ten shots of alcohol per day.

I don’t mean they gave the mice ten shots of alcohol.

I mean that if you are I did the experiment, and we were to follow it to the letter, we would end up consuming about ten shots of alcohol at the end.

So it is rather extreme, but not completely unlikely.

It is quite possible that there are many people out there who are consuming good amounts of alcohol and a lot of PUFA fat.

There’s never been a time in human history where humans have consumed as many PUFAs as they do today.

Virtually everything that you eat that’s been processed has substantial PUFAs in it.

So this study is very important because it shows that the combination of PUFAs with alcohol is a very lethal combination.

Here’s an image that shows stained sections of rat liver to illustrate.

These show that the group of rats receiving unsaturated fat and alcohol had many lesions in their liver tissue.

They had even more lesions than the rats that had saturated fat and alcohol. 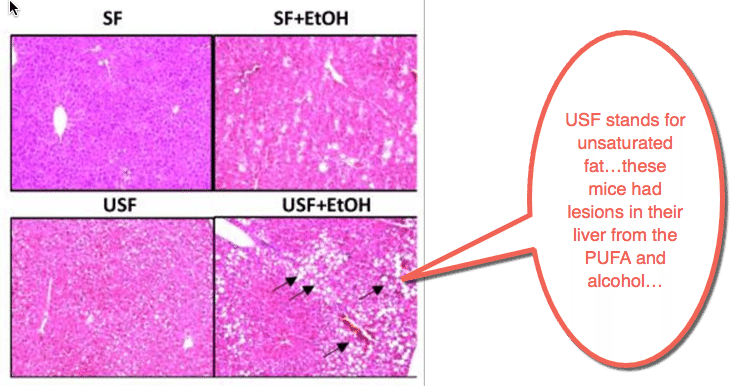 There were also significant problems with the rats receiving saturated fat and alcohol.

In fact, the researchers noted that their results demonstrated

the protective effect of saturated fat.

The researchers also answer the question as to why PUFAs and alcohol are such a lethal combination.

They researched the issue further and determined that PUFAs loosen the tight junctions in the human gut.

The tight junctions are the cells that are like soldiers standing shoulder to shoulder.

They are a single layer of cells that keep the bad stuff in our gut.

These tight junctions keep it from spilling out of our gut and into our body.

The single-layer tight junctions are all that stand between bad stuff and your entire body!

So it’s important that the tight junctions stay tight.

With leaky gut syndrome, all sorts of toxins spill out into your body.

This is essentially raw sewage affecting every cell.

And it’s causing inflammation in every organ and every gland in your entire body.

The researchers note that one major component of PUFAS:

Our gut and our arteries are lined with endothelial cells.

So PUFAs produce inflammation in ALL of our endothelial cells throughout her body.

So, why is alcohol making the leaky gut worse?

The researcher said that the alcohol caused acute damage to the liver.

The liver is the most important organ in the body that processes toxins from the gut.

So it makes sense that with an injured liver and a leaky gut is a lethal combination.

I would vastly cut down or eliminate all consumption of PUFAs.

I would also make sure that I didn’t consume much alcohol.

There are many reasons not to drink alcohol, especially if you consume PUFAs.

See this for more on peach xanax mg, and see more on https://www.dailymedicaldiscoveries.com/online-viagra-scams/, and for more information see effects of viagra packaging