Taurine not only burns fat… It stops the body from storing fat too. Here’s how to use it…

I take care of my health to the extreme, I drink fruit smoothies, and I’m more active than most men my age…

But there’s something wrong with me down there.

No matter what I do, it just doesn’t work!

Well, to my shock, I discovered a hidden killer that strikes down even the fittest men and STOPS their erections without warning.

It can even stop you from losing weight…and make you pack on even MORE fat.

But I found a way to neutralize this hidden killer and enjoy not only my healthy lifestyle, but all the fun of sex again.

Here’s the hidden killer that strikes down even the fittest men – and how to stop it.

How to use taurine for fat loss

Taurine is an interesting compound that is found in small amounts in animal foods.

In recent years, scientists have discovered many benefits we can get from increased taurine intake.

Taurine helps with blood sugar regulation and many of the symptoms of metabolic syndrome.

Research shows it can improve some Parkinson’s symptoms.

Japanese research shows that taurine is probably the single most effective supplement for high blood pressure.

Recent research has shown that taurine could be very effective at preventing fat gain.

Animal experiments show that it may even help with fat loss.

These researchers carried out mouse experiments at the Kyung Hee University, Seoul, Republic of Korea. The journal Amino Acids published the results.

Taurine has many roles in the body.

Many of its metabolic functions have only been discovered in recent years.

“Taurine has been investigated as a beneficial molecule to reduce metabolic dysfunctions such as dyslipidemia, insulin resistance, and hyperglycemia.”

These metabolic problems are usually associated with fat gain and obesity.

So researchers became curious about the effects of taurine on body fat.

“…the anti-obesity effect of taurine has attracted much interest from many researchers as a potentially safe agent to reduce weight in the era of global obesity.”

Researchers know the effect of different types of food on lab mice.

So these researchers conducted some obesity experiments on mice, looking at the effects of taurine.

“This study was conducted to evaluate the anti-obesity effects of long-term taurine supplementation in a mild obese mouse model.”

They gave one group of mice a normal diet.

And they gave Group 2 and Group 3 a high-fat diet that consistently makes mice obese.

In addition, they gave Group 3 taurine with their high-fat diet.

The researchers then compared the three groups of mice over a period of seven months on the experimental diets.

The results showed that taurine has a definite anti-obesity effect.

The addition of taurine to the high-fat diet led to less body fat for the mice.

The mice weighed about 10% less when given taurine with the high-fat diet.

But taurine did not seem to increase activity in the mice.

The researchers studied a number of different genes that are responsible for creating new fat cells.

The analysis of those genes showed that taurine decreases the production of new fat cells.

The experiment showed that taurine seems to prevent the formation of body fat, rather than increasing fat burning.

Body fat can be increased in a few ways. And one of these is the creation of new fat cells.

Taurine seems to work in a different way from most other fat-lowering interventions. 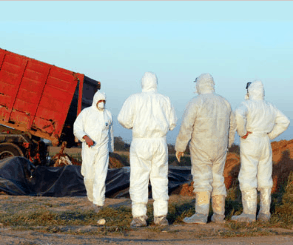 If you’re an American citizen over the age of 55, please see the following public health warning…

A deadly new disease from China is coming to the United States.

This new bacterial disease shuts down your lungs and other vital organs.

Chinese hospitals have already seen death rates as high as 100%.

Find out when it will get to your town and how to protect yourself – in this video.