When our bodies use protein, we create ammonia.

Ammonia is created all the time in our bodies because of course we are always using protein.

But ammonia is very toxic.

So our bodies have very elaborate mechanisms to dispose of ammonia.

Despite these mechanisms, sometimes we’re unable to dispose of all of the ammonia that builds up in our system.

This built up ammonia can cause many different problems for us.

But ammonia is most dangerous is as it builds up in the brain.

Endogenously generated brain ammonia thus may have a role in the cascade of cell damaging events involved in dementia.

The brain has a very difficult time getting rid of excess ammonia.

And excess ammonia always shows up in men and women who have dementia or Alzheimer’s.

It is possible that excess ammonia in the brain is one of the major causes of dementia or Alzheimer’s.

Thus, the total balance of free ammonia shifted from uptake in controls to release of different amounts from brains was probably affected by Alzheimers/Dementia.

Basically, this study looked at the brain patterns of 20 people, all of whom had Alzheimer’s or dementia.

In an ordinary brain, the cells take up excess ammonia and process it.

But in the brain of an Alzheimer’s or dementia person, their cells are overwhelmed with ammonia, and so they’re releasing ammonia rather than taking it up.

Releasing larger amounts of ammonia seems to be a signature of dementia or Alzheimer’s.

And if this is true, you would expect that

supplements, drugs, and foods that help the body get rid of ammonia should also help prevent or treat dementia and Alzheimer’s.

And you would be right.

There are several excellent ammonia fighting supplements and foods that have been extensively studied.

One of them is thiamine, otherwise known as vitamin B1.

There is evidence that thiamine deficiency leads to Alzheimer’s and supplementing it could help to prevent future symptoms.

One food that has ammonia fighting properties is the cinnamon herb known as Ceylon cinnamon.

This is not the same as ordinary supermarket cinnamon, which is cassia cinnamon.

Cassia cinnamon is quite toxic in any quantity at all and is best used purely as a flavoring.

Ceylon cinnamon is not toxic — it contains only very minor amounts of the toxic compounds that are found in ordinary supermarket cinnamon.

And as this study shows, cinnamon can actually help reduce ammonia and the brain, and therefore protect against or treat dementia.

In this case, Ceylon cinnamon is metabolized in the body into sodium benzoate, and the sodium benzoate actually helps the brain and the body process ammonia and increases memory and learning.

Sodium benzoate is often consumed as a food preservative and is also an important nutritional supplement.

Here we demonstrated that oral administration of cinnamon powder increased the level of sodium benzoate in the hippocampus part of the brain.

Keep in mind that they’re talking about mice in this study.

But the same effect would probably happen in the human brain.

And now, it gets extremely interesting.

This is like the Holy Grail in the brain.

Free radicals in the microglia cells in the brain are thought to be responsible for all kinds of rapid aging and destruction of the brain cells.

Microglia cells are a type of immune cell that help to defend the brain and help it recover from injury.

And now we find that sodium benzoate, which you can consume by simply taking Ceylon cinnamon in modest quantities, can protect the brain against free radicals and inflammation.

The authors conclude with five reasons why Ceylon cinnamon should be the drug of choice to protect against dementia and Alzheimers.

Cinnamon has been widely used as flavoring material and spice throughout the world for centuries.

Cinnamon is metabolized to sodium benzoate, and is excreted through the urine, if in excess.

One recent study has shown improvement in cognitive behavior by cinnamon extract in a mouse model of Alzheimers.

Cinnamon is very economical compared to other existing therapies.

So has your doctor recommended that you or your loved one take cinnamon?

If you are going to try cinnamon, as I do, you may take a quarter teaspoon several times a week, preferably in food that you enjoy. 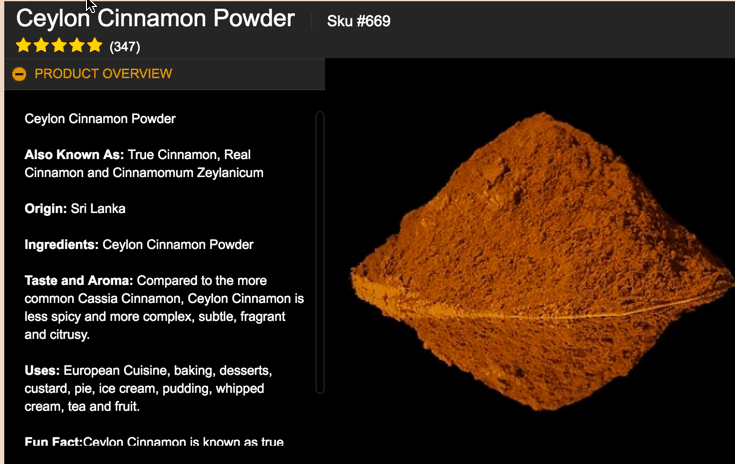 You don’t have to take it every day unless you’re fighting Alzheimer’s or dementia.

Just a couple of times a week is enough to greatly reduce the ammonia buildup in your brain and your body.

It may be the key to slowing down aging in general.

And it’s very easy and tasty. Just remember to use Ceylon cinnamon, and not cassia supermarket cinnamon.

Matt Cook is editor-in-chief of Daily Medical Discoveries. Matt has been a full time health researcher for 26 years. ABC News interviewed Matt on sexual health issues not long ago. Matt is widely quoted on over 1,000,000 websites. He has over 300,000 daily newsletter readers. Daily Medical Discoveries finds hidden, buried or ignored medical studies through the lens of 100 years of proven science. Matt heads up the editorial team of scientists and health researchers. Each discovery is based upon primary studies from peer reviewed science sources following the Daily Medical Discoveries 7 Step Process to ensure accuracy.
Cinnamon and Its Metabolite Sodium Benzoate Attenuate the Activation of p21rac and Protect Memory and Learning in an Animal Model of Alzheimer’s Disease
http://journals.plos.org/plosone/article?id=10.1371/journal.pone.0130398

Ammonia is endogenously generated in the brain in the presence of presumed and verified dementia of Alzheimer type
http://www.sciencedirect.com/science/article/pii/0304394090906912