Believe it or not, more and more research is coming out, showing the benefits of sugar, gasp! I know you don’t believe it yet, but you will.

I showed you an earlier study where the more sugar people eat, the thinner they were. Actually, a number of studies say the same thing.

However, sugar does not exist in a vacuum.

In the real world, sugar is often consumed in the form of, say, donuts, which contain large amounts of harmful polyunsaturated fats and fatty acids, and harmful additives along with the sugar.

I believe that a lot of the harm from sugar that is perceived by the public is due to the fact that most sugary foods are complete junk.

And one thing that causes people problems around sugar consumption is the fact that they are already metabolically challenged.

So it’s great news that a simple amino acid, glycine, has been shown in the study to reduce blood pressure, to reduce the size of fat cells, and to cut back on the secretion of free fatty acids that cause insulin resistance and eventually diabetes.

I don’t like studies like this in general. For one thing, they feed rats total and complete garbage in the form of what they euphemistically call “Rat Chow”. Rat Chow often includes high amounts of corn oil, which is extremely toxic.

However, it’s what we can do with what we got. That’s the study. And the other reason I don’t like it is, it’s not natural to have sugar water all the time. The rats had no choice, when they were thirsty, they went up to the water bottle, sucked it down, and ended up sucking down sugar water. They couldn’t even get regular water. For rats!

However, the study was very clear in the fact that fatty acids in the blood fell, blood pressure fell, and obesity fell, and it was quite a staggering difference.

Why does glycine lower blood pressure, insulin resistance and free fatty acids in the blood?

Another study gives a clue.

And cortisol is what is responsible for breaking down lean tissue, including the heart, muscle cells, and even the brain. High levels of cortisol cause the free fatty acids that will eventually result in diabetes.

What can you do with this now?

In almost all indigenous cultures, they don’t just eat muscle meat. They eat the entire animal, including the connective tissues and organs.

Muscle meat is very low in glycine. But all the rest of the animal is high in glycine. There have been other studies where balancing muscle meat with glycine suppressed harmful levels of methionine found in muscle meat.

So here’s another benefit of consuming the connective tissues and organs. But you don’t have to do that. There is an easier way.

Take some gelatin every day

You can purchase gelatin very easily. Everybody knows those little envelopes they sell in the supermarket. But those are kind of expensive. You can buy gelatin by the pound on Amazon. And you can take a couple of tablespoons every day.

There’s even a type called collagen that is quite soluble in water, and you can just dissolve it in water and drink it down.

It doesn’t taste like anything. It comes from grazing cows, so it’s even kosher and okay for Muslims also, I suppose. 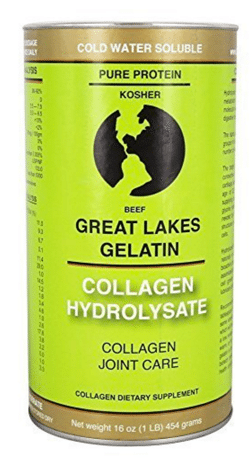 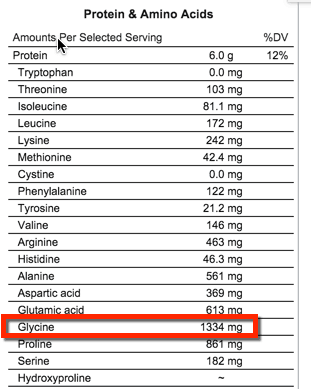 Make sure that you are taking adequate amounts of either bone broth, or gelatin every day. There may be nothing better for overall health.

Matt Cook is editor-in-chief of Daily Medical Discoveries. Matt has been a full time health researcher for 26 years. ABC News interviewed Matt on sexual health issues not long ago. Matt is widely quoted on over 1,000,000 websites. He has over 300,000 daily newsletter readers. Daily Medical Discoveries finds hidden, buried or ignored medical studies through the lens of 100 years of proven science. Matt heads up the editorial team of scientists and health researchers. Each discovery is based upon primary studies from peer reviewed science sources following the Daily Medical Discoveries 7 Step Process to ensure accuracy.
Glycine intake decreases plasma free fatty acids, adipose cell size, and blood pressure in sucrose-fed rats
http://ajpregu.physiology.org/content/ajpregu/287/6/R1387.full.pdf

Effects of orally administered glycine on myofibrillar proteolysis and expression of proteolytic-related genes of skeletal muscle in chicks.
http://www.ncbi.nlm.nih.gov/pubmed/17624491

Nutritional analysis of one tablespoon of gelatin
http://nutritiondata.self.com/facts/sweets/5480/2
1. Does glycine raise blood sugar? Glycine is a very common amino acid found especially in connective tissue and organ meat, such as gelatin and pork skin. The best source of glycine is in fact gelatin or its sister collagen.  Collagen is the same as gelatin but the molecules are split up into a much simpler one so the collagen does not thicken and can easily dissolve in coffee, juice, or water. Glycine can actually lower blood sugar by creating a powerful insulin reaction. Any protein like glycine will cause glucagon and insulin to rise. This will draw out sugar from your blood and When asked hello yeah. The result will be low blood sugar. And therefore, your body will secrete cortisol in order to preserve blood sugar and this cortisol can actually raise blood sugar.2. What is the relationship between glycine and cortisol? The amino acid glycine is found in high quantities in college and gelatin and pork skins and to a lesser extent egg white and muscle meat. Glycine itself when you consume it does not raise or lower cortisol levels appreciably. However, over time, glycine can help lower inflammation in the joints and connective tissue which can lower cortisol levels. Glycine can lower inflammation in the body when taken over a period of time as part of a properly balanced and nutritious diet. The lower inflammation will then result in lower cortisol levels. So glycine can actually lower cortisol over time by lowering inflammation in the joints.3. What are low glycine symptoms? It is rare for symptoms to appear from low glycine. However, it is very common for a dye to be low in glycine. The symptoms will appear in the form of joint pain and wrinkles and premature aging. That’s because if you eat meat, meat is high in the amino acid methionine. Methionine consumption actually speeds up aging and increases inflammation in the body. We are designed to eat the entire animal, from hoof to tail, and the connective tissue and organ meet in the animal has a high amount of lysine. This glycine blocks methionine. So by consuming just muscle meat without the connective tissue and organ meat, you get high methionine and low glycine and this causes the premature aging and inflammation. In many studies, it is been discovered that when you consume adequate lysine, you can offset the effects of methionine or block it entirely and slow down the aging process. Rats and other animals raised on a low methionine diet live quite a bit longer for this reason.