Do you ever use ginger?

Ginger is wonderful for cooking.

The Chinese have taken ginger for thousands of years for gastric problems.

In today’s newsletter, I want to show you how you can use ginger to your advantage.

And I’ll show you several different ways it can help you.

For people with arthritis, ginger has been known to help for years.

This is one of the wonderful studies coming out of Iran.

Fortunately, science does not, or should not, involve world politics.

They are doing some good science in Iran.

And this study is definitely an example.

The researchers gave ginger to one group of people who had severe osteoarthritis in the knee.

They gave a placebo to another similar group.

This is a very well-designed double-blind randomized controlled trial.

Double-blind, randomized controlled studies are the gold standard of studies.

These studies are constructed so that neither the patients or the researchers have any idea who is in which group.

It absolutely removes the potential for bias.

After a couple of months, the researchers did some blood tests.

They found that for people taking ginger, inflammation had gone down quite a bit. 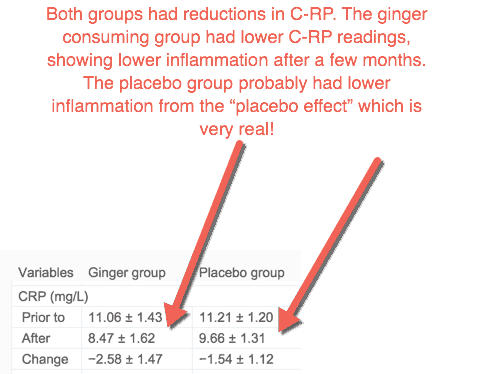 What was more interesting is that their C-reactive protein inflammatory markers had fallen.

C-reactive protein, or CRP, is a major marker of internal inflammation.

You want a CRP level in the blood test of as close to zero as you can get.

Further, they tested and found that the ginger group had lower amounts of other inflammatory markers.

They were especially lower in TNF-alpha and IL-1a.

These are both markers showing evidence of inflammation in the body.

What was most interesting in this study was the placebo effect.

Notice that the CRP levels fell for both the ginger group and the placebo group.

I believe that this is an indication of the effect of the mind on healing the body.

I have found very, very powerful effects of the mind on the body.

Some would call these “psychosomatic,” but I believe they are not.

Psychosomatic is the term to describe when someone is convinced they are receiving help and get better.

But in psychosomatic recoveries, there was no actual help provided.

The patient only believes they were helped — it was all in their mind.

But this belief can be a powerfully healing thing.

I have seen many studies about the power of the mind to heal problems.

The mind can heal things such as the knee arthritis here.

But it can also heal severe, life-threatening illnesses such as terminal cancer.

In any event, it seems worthwhile to take ginger if you have arthritis.

And if you want a lower inflammation of any sort.

See this for more on Arthritis, and see more on diet and exercise, and for more information see natural remedies.