Today we’re talking about prostate enlargement, and how to fix it.

I get many emails from men such as a guy — I’ll call him Phil.

Phil says that his doctor put him on Flomax.

This is one of the drugs to treat enlarged prostate.

Now he’s wondering if I think the Flomax is going to help him or not.

Well, I wish I had good news for Phil, and for others like him.

Flomax can create troubles for you.

Let’s look at how Flomax works and why it is a terrible idea to be taking it.

But here’s what we know about Flomax.

Everyone knows that drugs take a long time to get approved.

But, despite the long time that it takes, there are very few safety studies done on these drugs before approval.

Here is a phase 3 study written up by the investigators.

A phase 3 study is called a long-term study in Big Pharma language… which essentially means ONE YEAR.

I don’t know about you, but I don’t think that one year is long when you’re talking about something you’ll take every day!

This study is for Flomax.

It was one of the studies done before Flomax was approved for recommendation by doctors.

Now they can prescribe it for men experiencing benign prostate enlargement (BPH).

The study followed a bunch of men for about a year.

And it’s what is called an open label study.

That means that the men knew they were taking Flomax.

This is a huge defect in the study!

Only randomized studies are truly valid.

They are the only way to eliminate the effects of bias and prejudice amongst the doctors and patients taking the drug.

Now, the biggest bias occurs with who is accepted into this study.

Researchers screened out anyone with significant issues of any kind.

This study did not allow anybody with significant prostate problems, blood pressure problems, diabetes, or any other chronic illness.

Essentially, this is a study of healthy men with slight prostate problems.

However, this is what passes for a drug company study.

They gave Flomax to almost a thousand men.

But fully one-third of the men dropped out before the one-year trial was finished.

So really, they have full year results for just around 650 men.

Of the men who dropped out, some men simply stopped showing up to their appointments.

But about 20% of men stopped because of side effects. 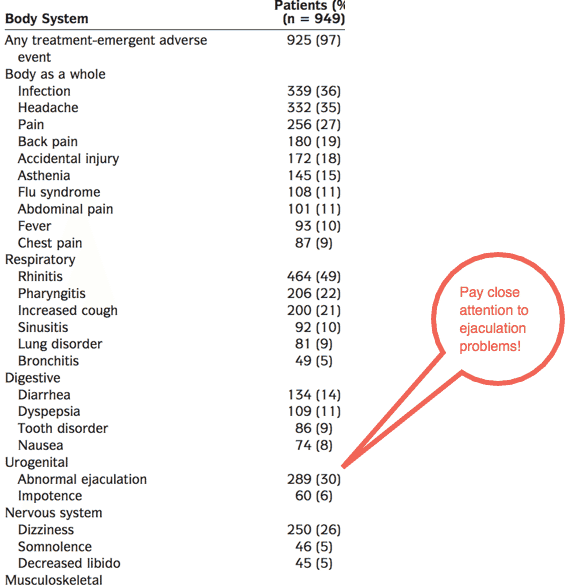 If you look at the table above, you’ll notice that 30% of the men experienced ejaculatory issues.

The majority of the other issues were that Flomax made the men feel sick.

They felt sick as if they had a cold.

They had problems with Flomax and it made them feel pretty terrible.

They felt bad enough that 20% of the men discontinued use of Flomax because of it.

But did Flomax improve their prostate problems?

30% of the participants reported improvements.

With medications for prostate, you’d expect a much higher number of men helped!

Only 30% of the men experienced improvement significant enough to write home about.

So that you can see what that 30% represents, imagine these results in the real world.

Let’s say that 100,000 men take Flomax and deal with the side effects without quitting it.

But all of the men would still be taking it, and all would deal with side effects.

I’ve said this many times, but you are the guinea pig when it comes to drug testing.

The study we looked at today is a phase 3 trial, and it was only for one year.

This was for a medication that you’re expected to be on for the rest of your life.

The actual study does not even mention ejaculatory problems.

However, many studies have been conducted on Flomax since this pre-approval study.

And a very impressive number of studies have shown that Flomax causes severe ejaculatory problems.

But, doctors just ignored them for the longest time.

One study showed that 30% of men experienced significant ejaculation problems from Flomax.

This was already known in 2003, but it wasn’t until recently that anyone has paid attention.

They knew it during the approval study — they noted that 289 men out of the 1,000 men had abnormal ejaculation.

But they completely ignored the results to get Flomax approved.

Nobody knows if the ejaculatory issues are fixable.

They don’t know yet if the problems go away and or if they are fully reversible.

After a drug is been approved, there is very little money available for any further studies of it.

Unless they can find new uses for it, the drug companies move onto the next drug.

They’ll only do more research if they find new uses that bring in more cash.

In the case of Flomax, this study was the end of most of the studies.

Except, we have some great studies out of places like Iraq where Big Pharma’s money doesn’t mean anything.

Surprisingly there was an excellent study done in Iraq recently on Flomax.

This was a mouse study.

The researchers injected mice with Flomax.

The results showed that Flomax caused the mice testicles to become damaged.

Space between the cells of the testicles increased and was filled with some type of fluid.

At the same time, sperm became half functional or dead.

This damage could be because of the testicle damage. 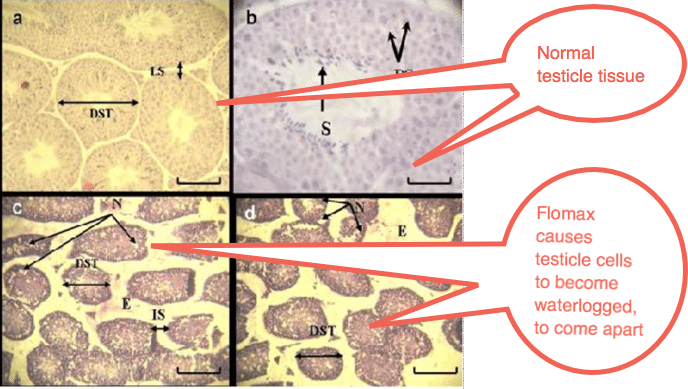 Again, nobody knows if this is reversible or not.

So here’s basically what you get with Flomax.

You get a drug that causes testicle damage.

You get a drug with side effects so severe that 1/5 of all men stop taking it.

At the same time, you ignore the real cause of prostate issues — which I will talk about in another newsletter.

Meanwhile I would highly recommend that you talk to your doctor about alternatives other than Flomax and drugs like it.

It’s reasonable to expect that the problems with Flomax are probably true of all alpha blockers.

Matt Cook is editor-in-chief of Daily Medical Discoveries. Matt has been a full time health researcher for 26 years. ABC News interviewed Matt on sexual health issues not long ago. Matt is widely quoted on over 1,000,000 websites. He has over 300,000 daily newsletter readers. Daily Medical Discoveries finds hidden, buried or ignored medical studies through the lens of 100 years of proven science. Matt heads up the editorial team of scientists and health researchers. Each discovery is based upon primary studies from peer reviewed science sources following the Daily Medical Discoveries 7 Step Process to ensure accuracy.
Long-term, open-label, phase III multicenter study of tamsulosin in benign prostatic hyperplasia
http://www.goldjournal.net/article/S0090-4295(00)01042-6/abstract