Everyone knows that high-fiber is good for you, right?

If you’re constipated, the answer is to increase your fiber, right?

You read here in order to find the other point of view, the truth above and beyond the fictions.

As it turns out, this issue of high-fiber being good for you may not be true.

Here’s a study on constipation.

The study focused on constipation that occurs on a chronic basis.

All of the people in the study had a colonoscopy to rule out any complications.

None of them had any surgery on the colon or anything serious.

They just have a lot of chronic constipation.

What researchers did was quite simply is put them on a zero fiber diet.

And guess what happened to the constipation for these participants?

It pretty much went away.

Some of these patients were having movements that were occurring only once every 3 1/2 or four days.

As a result of this study, movements started happening every day.

Let me tell you a secret about constipation.

The longer fecal matter remains in your colon, the longer bacteria have to enter the body.

And bacterial endotoxins soak through the colon and enter the body.

You want to speed up the transit time not slow it down.

It’s essential that you have food passing your system as quickly as possible without getting diarrhea.

Two bowel movements are even better than one per day.

But these people are so chronically constipated that they were only having a bowel movement once every 3 1/2 or four days.

So it’s extraordinary improvement having one every day.

Then some of them drifted back to their old high-fiber diet. And guess what happened?

Yes, you guessed it.

They started getting constipated again as soon as they added back to fiber.

As the researchers say:

dietary fiber to help constipation is but a myth.

And the reason that low or no fiber diets help constipation is this:

All you do when you add fiber to a constipated bowel, is increase the pressure in the bowel.

You don’t do anything to actually eliminate and move the feces.

So the fecal matter just sits in your bowel and puts out endotoxins.

A constipated bowel is an inflamed bowel.

So virtually everyone with chronic constipation has bowel inflammation.

A constipated, inflamed bowel is thickened.

If you looked at it, it would be red and maybe even bleeding a little: 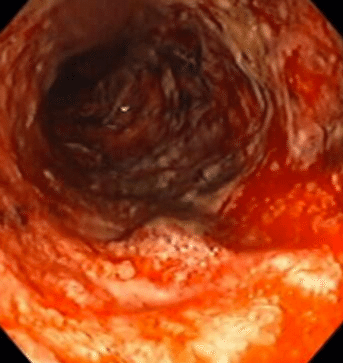 Now compare the bowel above, which is inflamed and constipated, to this bowel: 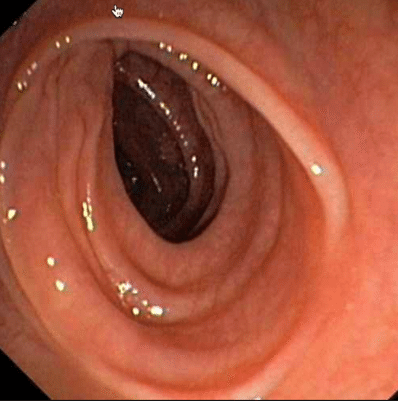 The difference is striking.

Almost everybody has inflamed bowels.

They have inflammation in the bowel, which lets bacteria, endotoxins, fungus, food toxins and viruses into their bodies.

Their bodies are constantly fighting off a whole army of invaders.

The primary job of fighting off this foreign invasion falls to the liver.

No wonder potentially two thirds of adults have fatty and diseased livers.

This study reveals that for someone who is constipated, fiber adds bulk.

It is not logical to increase both the volume and size of stool in patients with constipation and indeed for anybody with difficulty in passing stools,

If you’re constipated, you might try a low fiber or no fiber diet.

You might see how it goes for a while.

There are some natural means of increasing bowel movements.

Most people who are constipated suffer from low magnesium.

Increasing magnesium will help you get better quicker and better formed bowel movements.

Trying these certainly can’t hurt, and a high fiber diet obviously can.

See this for more on Fiber and Constipation and see more on diet and exercise, and for more information see effects of Eating Healthy.