But have you ever wondered why nipples are sensitive?

Have you thought about why some people like oral stimulation of their nipples and others do not?

This study explores the sexual arousal from nipples and breasts in women and effects of male nipple stimulation.

But, as the researchers note at the start of the study:

No attempt to question people about such sexual behavior has ever been undertaken.

So our brave researchers stepped into the breach and questioned both men and women and how male nipple stimulation effects men.

They asked the participants about how they get aroused with nipple and breast stimulation.

Most women get sexually aroused with breast stimulation.

This isn’t really a surprise to most people.

In the study, almost 80% of women enjoyed breast stimulation.

But some women are not into it.

And some women are ticklish or find the feelings objectionable.

Over half of the men enjoyed stimulation of their nipples or breasts in a sexual situation.

However, while women often ask for breast simulation, men seldom do.

I suppose men are self-conscious about male nipple stimulation or feel weird.

But men should not feel weird because all is fair in love and war as long as everyone is happy and no one gets hurt.

And according to this study, breast stimulation can be equally arousing for both men and women.

I remember when we did one of our workshops a couple of years ago.

One man reported that his girlfriend had an orgasm from nothing but breast stimulation.

It is not uncommon.

Although most men and women enjoy it, some people just don’t.

About 7% of both the men and the women who participated reported that they felt less arousal with breast stimulation.

We are all wired differently.

Here are the full results displayed as a percentage of those who said yes: 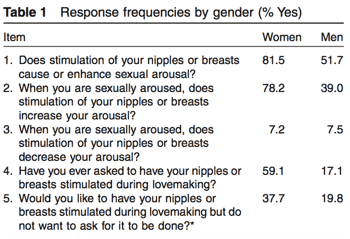 In a previous study, both men and women experienced an increase in prolactin when their breasts were stimulated.

The results were the same whether the stimulation was done by their partners or by themselves.

Yet, prolactin is often a hormone that lowers arousal and inhibits orgasm, especially in men.

It’s puzzling that prolactin levels are higher with breast stimulation which can also be sexually arousing.

I think there’s a lot more about prolactin that we need to know.

To continue reading about male nipple stimulation and other topics that pertain to men, click here. If you’d like further information, feel free to check out these references:

Is It 'Normal' For Men To Enjoy Nipple Stimulation?
https://www.steadyhealth.com/medical-answers/is-it-normal-for-men-to-enjoy-nipple-stimulation

A Beginner's Guide to Nipple Stimulation
https://www.liveabout.com/a-beginners-guide-to-nipple-stimulation-2983501
The Female and Male Adolescent Breast
1. What are some benefits of nipple stimulation?
Men and women have what I view as sexual polarity. A man’s penis is a positive pole and his chest area is a negative pole. In a way, a man’s chest is his receiving area and his penis is his giving area.
This is backed up in many Taoist and Tantric philosophies that go back thousands of years.  It is in my experience a useful model. So a man’s chest is his primary area to receive sexual energy. For this reason, small amounts of nipple contact and nipple stimulation when with a sexual partner can be very arousing and can allow sexual energy to circulate better between a man and his partner.
For a man and woman having sexual intercourse, if his penis is inside her, and her breasts are contacting his chest, the energy circulation works best. There can be the perception of that sexual energy entering the man’s chest which can enhance the sexual experience and pleasure many times over.
If a man is by himself he can also imagine that situation and he can increase and produce some of the pleasure he would have in partner sex even if he is by himself. And this can happen even without touching his nipples at all.

3. What are some male nipple stimulation side effects?
It has been found that male nipple stimulation causes sexual arousal both in males and females, though the male aspect is something that is not much talked or known about. Since nipples are usually associated with women, it is natural that the topic of nipple stimulation is usually limited to women. Some studies have found out that as much as 51% of guys find nipple stimulation arousing and usually are interested in engaging in it.
But not usually every man finds nipple stimulation arousing, or has a positive connection to it. There have been even cases, where men have been found to lactate by nipple stimulation. But this occurrence has been highly debated as it is very unlikely for a man to lactate as naturally like a woman. The hormone that is necessary to produce milk is called prolactin which is usually found in women. But possibly if a male suffers from a hormonal imbalance, which might cause an increase in the rate of prolactin production, the nipple might secret fluid but that is usually considered an assumption of sorts. The usually male nipple stimulation has been found to increase the sexual desire among men and that is one reason why some men find it very erotic and arousing to have their nipples played with, when enjoying sex.
But overstimulation of nipples might cause wear and tear or create injuries to the skin, especially around the nipples, if gentle care is not taken.


4. Is men nipple stimulation pleasurable?
Men nipples stimulation has been often quoted as pleasurable, though there might be a percentage of men who may not like it. Nipples has plenty of nerve endings which are sensitive to touch and has been found to connect to the part of the brain which causes sexual arousal and increase sexual feelings. Though nipple stimulation is often associated with women and believed to be an aspect of female sexual pleasure, men do get the same effects as women on stimulation. As much as 40% of people, according to some studies have expressed an increase in their pre-existing sexual arousal when their nipples were stimulated.
As much as 50% of men find pleasure in playing with their nipples in the throngs of passion or when their partner plays with their nipples. It can be safely said that the percentage of men who don’t find nipple stimulation pleasurable might have psychological reasons, which might be a result of the social or cultural programming. There has also been instances where men self stimulate their nipples during masturbation, which points to the fact that nipple stimulation can be pleasurable and be a healthy part of enjoying the body’s erogenous zones. Even for some men, nipple stimulation in itself can cause them to successfully attain orgasm.

5.How does breast stimulation for labor induction work?
Nipple play or the stimulation of breasts is often a natural way to get aroused while having sex.
Women usually love their breasts to kissed or sucked, dependant on how they want to be stimulated. It is sexually arousing for most of them, since nipple stimulations have a direct effect on the genital regions. It can be deeply fulfilling and sexually satisfying for many women, though some may not like it as much.
There is a lot of discussion happening these days around the topic of Breast stimulation for Labor induction. Nipple stimulation can release hormones (Oxytocin) which causes the Uterus to contract. This helps to aid labor induction though many doctors would not recommend nipple stimulation to start labor in pregnant woman. I suppose culture differences play a important role here, given the stigma associated to such experiences. As much as 50% of Women in Japan, use nipple stimulation to help initiate labor, as reported in the journal, Plos One. Some studies even show that, Nipple stimulation reduce the probability of high – risk pregnancies which is usually caused by high blood pressure, Diabetes or too much amniotic fluid levels.
Most research studies show that Oxytocin is released when the nipples are manually stimulated, usually done by the woman herself, her partner or in some cases where breast pumps are used. Gentle massage of the nipples and more specifically the areola is the simplest way to induce breasts stimulation for labor induction. A willing partner can gently massage the areola with his fingers and if comfortable, gently use his mouth to stimulate the nipples mimicking a baby nursing on its mother’s nipples.
It is important, not to experiment with breast stimulation if a woman is having a high risk pregnancy especially in cases of High blood pressure, pre-eclampsia (pregnancy complication caused by high blood pressure) or any other related risks. It is always prudent to talk to your doctor in such a case.

7. What To Do With His Nipples, Because They Can Be Sensitive, Too

9. How to Have a Nipple Orgasm