The other day, a dentist contacted me, very kindly, and helped me better understand a dental issue I had written about recently.

And he happened to mention the use of fluoride treatments.

So I thought I would show you some very important studies that have been done recently on fluoride, and you can judge for yourself whether fluoride is something that you want to take into your body.

My water is fluoridated to the level of 0.7 mg/L.

And it’s helpful to know that the study that I’m going to be showing you involves water at a similar fluoridation level.

This really made everybody super mad —

They gave female mice and baby mice water fluoridated at .5 mg/L. That’s less than what we have at my house.

(Of course, I use a fluoride filter on my water, so I don’t get any fluoride it all, but if I were to drink from the tap, I would get more fluoride than these mice.)

That’s not so good. That means that the thyroid function in these mice was lower. And there’s more:

hypertrophy of their thyroid glands

The adult mothers had a thyroid that was 41% larger than normal mice.

And the baby mice had a larger thyroid too.

After they cut out the fluoride, the mice returned from being hyped up on thyroid, but they still exhibited tissue changes from their fluoridated water experience. And these tissue changes never fully reversed, and

And these tissue changes never fully reversed, and

That means that maybe we are all low on thyroid because we’re drinking fluoridated water?

I do not remember ever ordering water that has fluoride in it.

Somehow they just dump fluoride in our water, even though we don’t ask for it.

We don’t want it.

So now let’s shift to another study, that actually involves real human beings.

This is the study that made everybody really mad.

For some reason, fluoride is like the third rail for dentists and for public health people.

They just keep hopping up and down insisting that we all get toxic levels of fluoride because they say so.

We’re not supposed to have a choice.

We’re too stupid to judge whether fluoride is good for us or not.

I have no trouble with fluoride fluoridated toothpaste if you want to use it, but if you don’t want to use it you shouldn’t have to.

Why should you have what many regard as poison dumped in your drinking water, just because someone says it should be?

Why can’t you have a choice?

Anyway, enough of that.

Let’s go back to the study.

Their method was simple.

They did not do a gold standard randomized controlled trial,  but they did something that was pretty clever.

They went to an area of England where the people are generally similar.

The areas with the fluoridated water reported a much higher number of cases of low thyroid, hypothyroid.

It sure does appear that fluoridated water causes hypothyroidism.

As they said in the study:

This is why I use a filter on my tap water — so that I don’t drink fluoridated water.

I don’t think anybody should.

And I don’t think it’s a good idea using fluoridated toothpaste either.

But that’s another newsletter.

I will leave you with one more study, this one showing that…

Here’s a diagram from the study that shows a lot of what’s going on here: 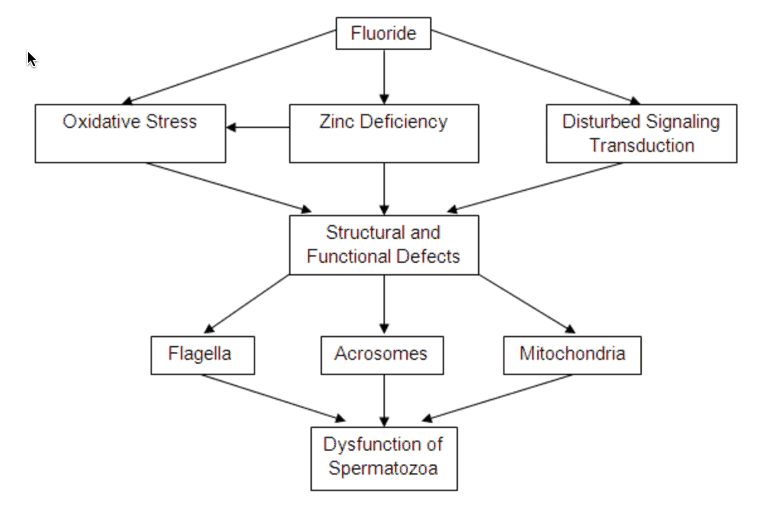 Notice the zinc deficiency from fluoride.  Notice the dysfunction of spermatozoa.

But there’s a lot more.

And this is based on at least 25 different animal studies.

It’s not just one study. It’s many, many studies that show —

Maybe you’re not planning on having any baby soon, so you don’t care if your sperm are quite up to snuff.

But maybe you do care about your testosterone.

zinc deficiency in testes and the male reproductive
system

Now that doesn’t sound very good. And it even gets worse: 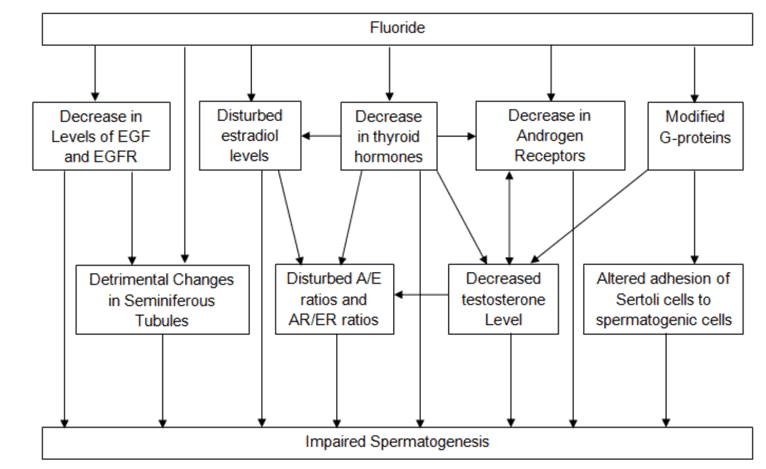 And I want to emphasize again, this is not from feeding rabbits 1 million pounds of fluoride.

These results are found at the quantities of fluoride that are often found in drinking water.

This is the result in terms of ability to fertilize an egg. 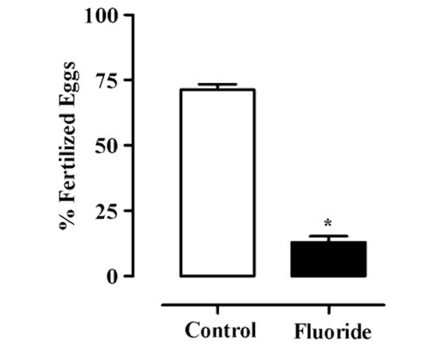 Now, what do you think about fluoride?

If you want to get rid of fluoride is pretty tough.

A regular water filter doesn’t get rid of fluoride.

You can use a reverse osmosis filter.

Or you can use a special fluoride filter that typically contains either charcoal particles, or activated aluminum oxide particles.

It isn’t cheap and the filters need to be replaced fairly often.

But it is far better than drinking fluoride and getting hypothyroid and low testosterone and damaged sperm, isn’t it?

Matt Cook is editor-in-chief of Daily Medical Discoveries. Matt has been a full time health researcher for 26 years. ABC News interviewed Matt on sexual health issues not long ago. Matt is widely quoted on over 1,000,000 websites. He has over 300,000 daily newsletter readers. Daily Medical Discoveries finds hidden, buried or ignored medical studies through the lens of 100 years of proven science. Matt heads up the editorial team of scientists and health researchers. Each discovery is based upon primary studies from peer reviewed science sources following the Daily Medical Discoveries 7 Step Process to ensure accuracy.
Daily Medical Discoveries has strict sourcing guidelines and relies on peer-reviewed studies, academic research institutions, and medical associations. We avoid using tertiary references. You can learn more about how we ensure our content is accurate and current by reading our editorial policy. To continue reading about Fluoride toxicity and other topics that pertain to men, click here. If you’d like further information, feel free to check out these references: Click for more information on this study about Fluoride Levels, for information on Natural Remedies, or for more information on how fluoride affects the males.