Everyone believes that too much sunlight causes skin cancer.

And they believe that sunscreen protects their skin against getting skin cancer.

But as you know, that’s not enough for The Cookster (that’s me).

And it’s not enough for Daily Medical Discoveries.

We need to know the truth.

The truth about whether sunscreens prevent skin cancer.

To find out, we need to use a randomized controlled trial.

Some of the participants will use sunscreen.

Some will a vitamin A type product consumed orally, such as beta-carotene.

And some will not use either one.

This type of study one of the best ways to test theories.

That’s what they did in Australia in this great study.

Then each group was assigned their sunscreen use.

Another group did not.

And the third group used beta-carotene.

The results are strikingly different from what you would expect.

First of all, skin cancers are very routine and hardly ever threatening.

If I had a skin cancer, I wouldn’t even go to a surgeon to get it removed.

I would just use one of the several natural remedies that are known to work.

These make the cancer go all the way through the phenomenon known as apoptosis.

Apoptosis is a type of “programmed” cell death.

Simply put, these remedies cause cancer cells to die off in a predictable way without hurting healthy cells.

But let’s get back to the study.

In this study, 65 people used sunscreen.

Many of these participants got simple carcinoma called basal cell carcinoma.

Basal cell carcinoma is the most common skin cancers.

Basal cell carcinoma affects deeper cells in the skin, more inside the body.

And it rarely spreads past its original location.

But the same number of people got basal cell carcinoma in the group that did NOT use daily sunscreen.

So this tells us that sunscreen does NOT protect against basal cell carcinoma.

The next question is, does sunscreen protect against the more threatening squamous cell carcinoma?

Squamous cell carcinoma is cancer of the cells closer to the surface of the skin.

It is not common for either type of cancer to spread.

Both types of cancer rarely ever metastasize.

And they are extremely routine.

So with that, let’s look at the statistics as far as using sunscreen to prevent skin cancer.

You can see that both squamous cell and basal cell carcinoma were hardly prevented with sunscreen.

There isn’t a compelling reason to put on sunscreen as prevention against skin cancer.

Any kind of prevention offered is very slight.

There are many benefits to skin exposure to sunlight. 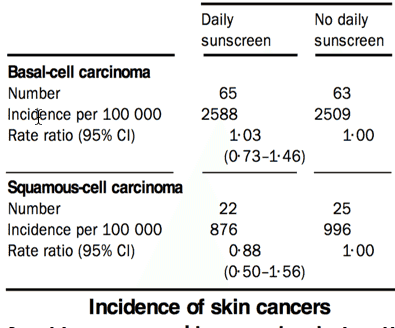 Sunlight can PREVENT many other cancers.

In this study, they looked at death certificates and determined how much sunlight the dead person got.

Then they correlated it with the cause of death of cancer.

This process is a rather poor way to determine whether somebody died as a result of exposure to the sun.

But it’s not easy to get this information another way.

The study is still rather revealing.

EXPOSURE TO SUNLIGHT WAS NEGATIVELY AND SIGNIFICANTLY ASSOCIATED WITH MORTALITY FROM FEMALE BREAST, OVARIAN, PROSTATE, AND COLON CANCER.

That means that the more sun someone got, the LESS likely they were to die of various types of cancer.

Sunlight is protective against cancer.

Don’t avoid the sun — embrace it.

I would probably just maintain a reasonable amount of sun exposure without sunscreen, and leave it at that.

If you are very sensitive to the sun, you may want to wear a hat and not let yourself burn.

Beyond that, stay in the sun!

Daily sunscreen application and betacarotene supplementation in prevention of basal-cell and squamous-cell carcinomas of the skin: a randomised controlled trial
http://www.sciencedirect.com/science/article/pii/S0140673698121682

See this for more on Sunscreens and Cancer, and see more on diet and exercise, and for more information see effects of Sunscreen on Skin.