There are many people every year who die of Alzheimer’s disease.

And many more people develop Alzheimer’s each year.

Alzheimer’s is currently one of the top 10 causes of death.

In this newsletter, I want to explore causes of Alzheimer’s disease.

And I’ll delve into the question, “Can diabetes cause dementia?”

I will suggest a very probable cause of Alzheimer’s that you can address.

I’ll even tell you how you can address it here.

So first let’s look at this massive review study.

It shows many links between diabetes and Alzheimer’s disease: 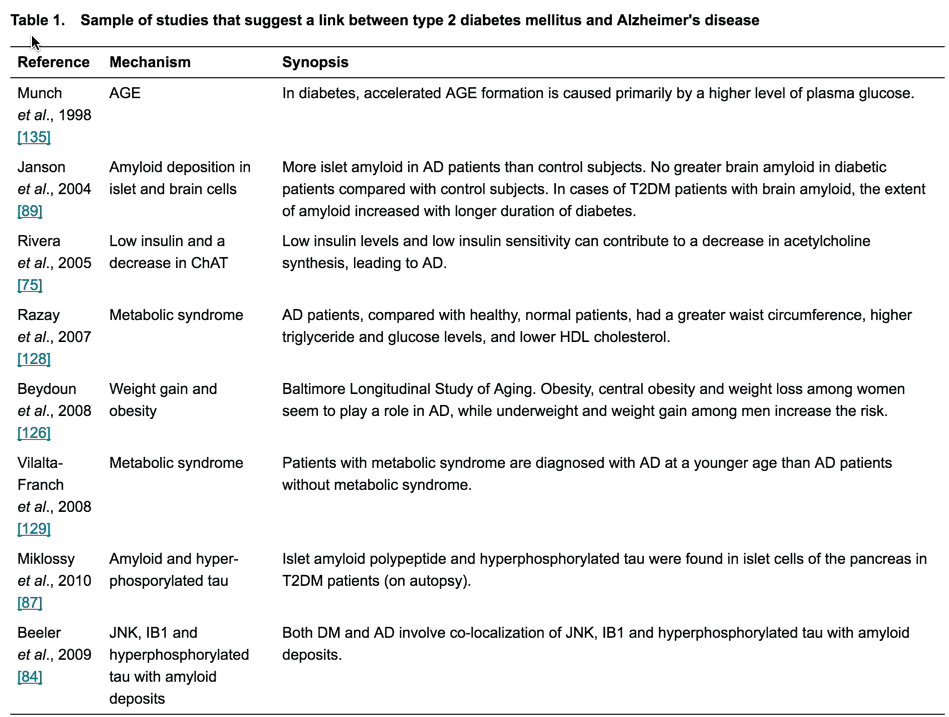 At least 100 studies have shown a strong relationship between diabetes and Alzheimer’s disease.

Diabetes and memory loss have often occurred together.

The phenomenon known as Diabetes Dementia may even be early symptoms of Alzheimer’s.

Yet doctors continue treating the two as if they are completely separate.

If you have diabetes or prediabetes, you are much more likely to get Alzheimer’s.

One study was done in Rotterdam recently.

This study showed that you have double the chances of getting Alzheimer’s if you already have diabetes.

Autopsies done on people with diabetes have found tangled proteins.

These proteins have affected the person’s beta cells in their pancreas.

These tangled proteins are called amyloid and tau protein.

And they are also found in the brains of Alzheimer’s sufferers.

Both Alzheimer’s and diabetes sufferers have massive internal inflammation.

Patients with these diseases have higher amounts of C-reactive protein in blood tests.

Quite often, they have insulin resistance, excessive weight, and metabolic syndrome.

Researchers looked into the nitric oxide levels of Alzheimer’s patients and type 2 diabetics.

Patients with both diseases have large amounts of nitric oxide secreted in their cells all the time.

Nitric oxide is a necessary gas produced in our body.

But it’s needed in very small quantities on a limited scale.

Excessive nitric oxide in the brain is very damaging.

It filters into the nerve cells and kills them.

This causes massive inflammatory reactions in the brain which correspond Alzheimer’s disease.

Controlling nitric oxide seems to be key to preventing or treating Alzheimer’s.

Some of the compounds that seem to control or even reverse Alzheimer’s also work for diabetes.

Specifically, aspirin and methylene blue have had great results.

Methylene blue has often been shown to stop the progression or reverse Alzheimer’s disease.

Dosages of 50 mg or more per day were found to be effective.

Methylene blue is a very potent scavenger of nitric oxide.

It was also shown to help prevent or even reverse diabetes in experiments with animals.

Aspirin has also been linked to the same good results.

It seems that inflammation and nitric oxide are core causes of both diabetes and Alzheimer’s disease.

So you want to keep down inflammation.

And you want to minimize nitric oxide production in your body.

If you do these two things, you may be able to stop diabetes and Alzheimer’s disease.

Matt Cook is editor-in-chief of Daily Medical Discoveries. Matt has been a full time health researcher for 26 years. ABC News interviewed Matt on sexual health issues not long ago. Matt is widely quoted on over 1,000,000 websites. He has over 300,000 daily newsletter readers. Daily Medical Discoveries finds hidden, buried or ignored medical studies through the lens of 100 years of proven science. Matt heads up the editorial team of scientists and health researchers. Each discovery is based upon primary studies from peer reviewed science sources following the Daily Medical Discoveries 7 Step Process to ensure accuracy.
Diabetes mellitus and Alzheimer's disease: shared pathology and treatment?
http://onlinelibrary.wiley.com/doi/10.1111/j.1365-2125.2010.03830.x/full
Diabetes mellitus and the risk of dementia
http://www.neurology.org/content/53/9/1937.short
Methylene blue and Alzheimer's disease
http://www.sciencedirect.com/science/article/pii/S0006295209003359
The influence of NO synthase inhibitor and free oxygen radicals scavenger--methylene blue--on streptozotocin-induced diabetes in rats
http://www.biomed.cas.cz/physiolres/pdf/1998/47_337.pdf