There is a popular idea that men’s testosterone rates decline rapidly past age 40.

The drug companies love this idea.

It means they that can sell very expensive forms of testosterone supplementation.

Drug companies can make these solutions only available by prescription and for a very high price.

These supplements include injections and patches and implants that feed testosterone to men.

But testosterone replacement therapy has a lot of problems.

It may increase blood clots.

It increases red blood cells, sometimes far too much, taking them to high levels that are not safe.

And it increases estrogen levels.

Most men who received testosterone supplementation find that it increases their sex drive, but does nothing for performance.

In this newsletter, I want to address this myth that men’s testosterone falls precipitously as they get older, just as a matter of course.

Because in 1991, we did not have the obesity epidemic that we have today.

We did not have the high levels of PUFAs in the diet that we have today.

And we did not have high-speed pornography that has caused an epidemic of pornography-induced erectile dysfunction.

Men were actually much healthier in 1991 than they are today.

There are several myths about free testosterone.

Another myth is this idea that the only kind of testosterone that counts is free testosterone.

But a lot of testosterone is tied up in sex hormone-binding globulin (SHBG).

Once again, the drug companies love this idea, because in fact, as this study found, free testosterone and “albumin-bound” testosterone declines with age.

But there is more.

Because it turns out that testosterone does NOT decline at ALL:

I want to be clear that these men were aged between 39 and 70 years old.

They didn’t have known health issues, and they were not obese.

Otherwise, they were pretty normal.

The net effect was that testosterone only lost one tenth of its concentration between ages 40 and 70.

This is not the only study that shows men’s testosterone does not decline or hardly declines at all with age.

This study compared young men who are fathers, with old men.

And the study found:

Basal serum testosterone and estradiol levels were not different between the younger and older men.

And this study went further.

The study analyzed the sperm itself and ejaculate volume:

There were no significant differences in ejaculate volume and sperm morphology between the younger and older men.

And why is the problem so much more prevalent now than it used to be?

The Massachusetts study included group 1, healthy men, and group 2, men that had risk factors such as obesity.

The men with health risk factors had about 10% lower testosterone for their entire study period.

So the low testosterone followed these men as they aged.

We can conclude that once low, always low.

Unless a man fixes the health problems that underlie low testosterone, it will stay low.

This chart shows that testosterone bound to SHBG does not decline, it actually goes up.

And it makes up for a very slowly declining testosterone level in healthy men.

The net result is testosterone levels remain the same throughout life, so long as you’re healthy. 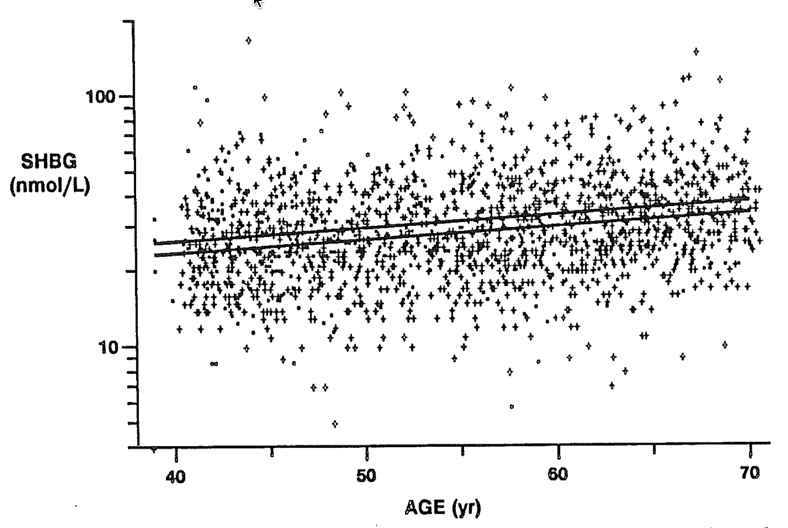 Here is a study conducted recently, that shows a 40% higher death rate amongst men with low testosterone.

It definitely pays to restore your health.

As you improve your health, watch your testosterone levels rise.

Testosterone does not have to decline as you get older.

One thing that does decline, however, is DHEA.

DHEA (Dehydroepiandrosterone) is an adrenal hormone that helps in androgen and estrogen production.

The lower levels of DHEA can lead to an assortment of other hormonal problems.

Lower DHEA seems to occur with aging, regardless of overall health.

DHEA does decline with age.

The Massachusetts study found that DHEA does begin to decline 2% to 3% per year with elderly men.

I am a big fan of small amounts of DHEA supplementation for this reason.

Before you make any changes based on what we talk about here, talk to your doctor.

It does seem to pay to lower estrogen, lower prolactin, lower stress hormones such as cortisol, and raise testosterone levels.

This can often be done with nothing but different nutrition, avoiding PUFAs, and certain supplements.

You may want to consider taking 5 mg to 10 mg of DHEA per day.

The take away though is that you can maintain a healthy high testosterone level throughout a long healthy life.

The “aging men have lower testosterone” is a myth that has been promoted by Big Pharma so that they can sell expensive supplements to men by prescription.

The supplements don’t work very well, and most men are probably better off improving their health and raising the testosterone naturally.

Matt Cook is editor-in-chief of Daily Medical Discoveries. Matt has been a full time health researcher for 26 years. ABC News interviewed Matt on sexual health issues not long ago. Matt is widely quoted on over 1,000,000 websites. He has over 300,000 daily newsletter readers. Daily Medical Discoveries finds hidden, buried or ignored medical studies through the lens of 100 years of proven science. Matt heads up the editorial team of scientists and health researchers. Each discovery is based upon primary studies from peer reviewed science sources following the Daily Medical Discoveries 7 Step Process to ensure accuracy.
Age, disease, and changing sex hormone levels in middle-aged men: results of the Massachusetts Male Aging Study http://www.ncbi.nlm.nih.gov/pubmed/1719016